My Favorite Child is… 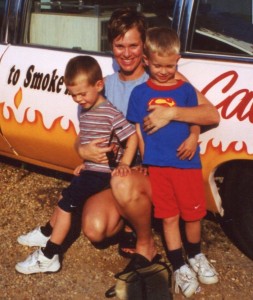 …the one who suddenly slept through the night when I desperately needed him to, back when he was little and I had a sinus infection and a total of 8 hours of sleep — for his entire babyhood.

…the one who cried and asked for his Mommy when I dropped him off at preschool.

…the one who didn’t.

…the one who skipped the Terrible Two’s and instead had what I not-so-affectionately called “The F—ing Fours.”

…the one who doesn’t leave my car smelling like a boys’ locker room after the team carpool (which would be neither, I suppose. Same goes for their friends.)

…the one who doesn’t leave a trail of Cheerios across the kitchen floor for me to discover — in my bare feet.

…the one who does, but cleans it up, however reluctantly.

…the one who gets Stephen Colbert’s jokes. And Jon Stewart’s. And mine.

…the one who scoops me some ice cream before finishing off the rest of the container.

…the one who can tell whether the dishes in the dishwasher are clean or dirty.

…the one who leaves the dishes in the sink anyway.

…the one who will carry on an entire conversation with me in a British accent. Or Russian. Or Indian. Or Jamaican, mon.

…the one who gives me advice so I don’t drive off cliffs in Mario Kart (again).

…the one who walks around the driveway in his brand-new socks.

…the one who killed the saxophone.

…the one who eats my lunch as an appetizer to his afternoon snack.

…the one who doesn’t factor my investment in lemonade mix, cups and poster board into his lemonade stand’s profits.

…the one who sits on the coffee table.

…the one who wants to go into communications, just like his mom.

…the one who wants to be an architect or a real estate mogul. Or both.

…the one was nearly born on July 30th — when he was due onNovember 1st — then made it to full-term, but almost arrived in the car on the way to the hospital.

…the one who showed up five weeks early and spent a week in the NICU while I ached to bring him home.

…the one who played the piano over the phone for me when I was in the hospital with cancer.

…the one I squeezed tight when I got home.

My favorite child is neither and both all at once. And I don’t need an outdated study or a sensationalist headline (props to Lisa Belkin of the New York Times for calling into question the words “ALL parents”) to tell me that I’m wired to prefer one child over the other, because no parent’s “wiring” is exactly like another’s, just like no two children are the same. Nor do they behave the same day in and out, year after year. Me neither.

Either way, my car still smells like sweaty teen boys.

Posted in All in the family, Boys will be boys, Momma Said | 2 Responses

2 responses to “My Favorite Child is…”