REEL LIFE WITH JANE: I Don’t Know How She Does It 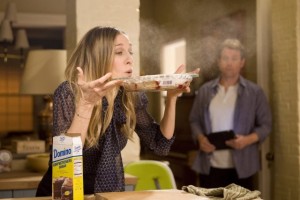 SYNOPSIS: Based on the book by Allison Pearson, this comedy centers on the life of Kate Reddy (Sarah Jessica Parker), a finance executive who struggles to find balance as the main breadwinner for her husband and two kids.

Sex/Nudity: Marital sex (or lack thereof) and relationships are a theme throughout the movie. A husband and wife kiss, talk about having sex and prepare for it, but it doesn’t happen. A reference to oral sex is played for laughs. One scene involves a strip club in which the feet of female dancers are shown.

Drugs/Alcohol: Several scenes involve social drinking by adults, such as wine with dinner or martinis at a restaurant. One joke involves coping with stress by mixing vodka and Xanax.

Which Kids Will Like It? Kids 14 and older who’ve read the book, like Sarah Jessica Parker, or like movies about parents trying to juggle family, work and life a la Parenthood.

Will Parents Like It?  This isn’t the best movie of the year, but it’s a cute flick that’ll resonate with stressed-out parents.

REVIEW: I know Sarah Jessica Parker bugs the heck out of some people, but I really like her. I wouldn’t say her range is all that great, but when she sticks with what she does best – that harried, stylish, earnest, semi-zany character – she does it well.

In this movie adaptation of the book by Welsh author Allison Pearson, Parker plays Kate Reddy, a successful financial manager with two adorable kids, a gorgeous townhouse, and a happy marriage with Richard (Greg Kinnear, whom I love in anything he does). With all the stresses of modern life, Kate and Richard struggle to balance the responsibilities of work and family, and it becomes even more challenging when a big project amps up her travel and work schedule and puts her in contact with stylish businessman Jack Abelhammer (Pierce Brosnan). All of this puts yet more pressure on Richard and the kids.

Kate holds her own in the world of high finance, thanks to help from her workaholic assistant Momo (Olivia Munn) and fellow working mom Allison (Christina Hendricks). I’m sure a lot of working moms can relate to Kate’s impossible juggling act — work-related cell phone calls, last-minute business trips, cowgirl-themed birthday parties, and that bake sale pie that she’s determined to bake from scratch.

Even though Kate is supposed to be a frantic mom who barely holds it all together, it takes more than disheveled hair to make Sarah Jessica Parker look harried. She still has that Sex and the City vibe, especially with her voiceover narration in this movie. I kept waiting for a bus to pass by and splash mud all over her stylish business suit.

But as things progress, it’s clear we’re not dealing with a single girl in high heels looking for love in the city. Kate is more like the rest of us – women who love our jobs and would just as soon not give them up, but also love our kids and husband, and certainly don’t want to give them up either. There simply must be a way to find balance, and as this movie suggests, it takes more than good intentions. It takes decisive action and a willingness to relinquish some of the control we’re so used to having.

Additional players include Kelsey Grammer as Kate’s boss, Seth Meyers as her opportunity-seeking co-worker, Jane Curtin and Mark Blum as her parents, Jessica Szohr as her nanny who thinks nothing of getting Kate’s son his first haircut, and Busy Philipps and Sarah Shahi as gym-obsessed moms who look down their noses at Kate and Allison.

I love the little gimmick of using freeze frames so characters can step out of the scene and address the camera. It makes Kate seem like a friend who knows exactly what we’re going through with the daily challenges of work and family. I also love that Richard is an involved dad who picks the kids up from school, and that they’re co-parenting in a believable way.

I Don’t Know How She Does It isn’t the best movie of the year. The dialogue is hit and miss, and some of the jokes aren’t that funny. But it’s a worthy addition to the catalog of mom movies that celebrate both work and family. It also encourages parents to find creative ways to get through this crazy life without losing our minds.