OFF MY NOODLE: Were Those Really the Days? 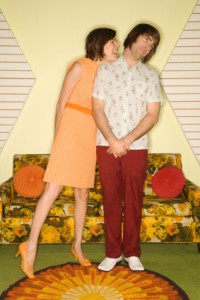 By the time you are old enough to get neurotic about your cholesterol counts and how soon you can tap into your IRA funds without a tax penalty, you are also likely to start romanticizing the past. But looking back through the mists of time can cause memory cells to fog over, yielding not entirely accurate recollections. It’s easy to convince ourselves that “back in the day” things were better all around: simpler, healthier, morally superior, and by golly, built to last.

I plead guilty to this. Increasingly, I find myself grousing that times were better “back then,” but I have my limits: I can’t bring myself to pine for the days before the advent of indoor plumbing. However, I do long for the days when tattoos were strictly for sailors or the rough biker crowd, and people who wore bull-like rings in their noses were only found in the pages of National Geographic, and not serving your morning latte.

Today, if you’re not tattooed you’re probably over 40 and don’t get invited to parties where the women wear gladiator-style sandals. On a recent foray into a MAC cosmetics store, the woman who sashayed over to help me was tattooed from her wrists to as far as the eye could stand to see. I ask you: Would you take beauty advice from someone spray-painted like a freeway overpass in gang territory? In an act of self-protection, I beat a hasty retreat.

The list of things I am convinced were superior “back in the day” is long, and includes a bygone era when a billion dollars was still real money.  Nowadays, you can hardly buy off a congressperson from Butte, Montana, with that kind of chump change. I also wish we still lived in an era when eight-year-olds didn’t need a city permit to sell lemonade from the corner and have to disclose nutritional and calorie content per glass.

Finally, I miss the rhythm and beauty of the English language as it was once spoken, particularly in Jane Austen’s England.  Be honest: Which of these gives the brain synapses more of a workout and the ear greater pleasure:
“I could wish, Miss Bennet, that you were not to sketch my character at the present moment, as there is reason to fear that the performance would reflect no credit on either.” (Mr. Darcy, Pride and Prejudice)

Or this:
“Hey, chick, don’t diss me.”
It’s enough to make a grown writer cry.

But if I am honest with myself, an annoying yet sometimes unavoidable procedure, I must acknowledge the brutal truth: Things weren’t so great when I was growing up. As a child, I watched news stories of bearded young things (including some women) rioting in the streets against anyone over 30 and against other old-fogey notions, such as social order. As I grew up, “drugs” stopped referring to things like aspirin, but dangerous, illicit substances that could make you write songs like “Lucy in the Sky with Diamonds” and walk out of 10th-story windows, thinking you were going to the kitchen for another brownie. Then, as now, we were mired in a long war, and politics was dirty and divisive.

“I also wish we still lived in an era when eight-year-olds didn’t need a city permit to sell lemonade from the corner and have to disclose nutritional and calorie content per glass.”

Even some of our sartorial styles now appear laughable or lamentable. When my kids look at photos of their dad and me in our early days as a couple, they are convulsed with laughter. This is not only because they cannot imagine that we were ever that young, but that our eyeglasses—stylish at the time—were roughly the size of Jupiter. Polyester leisure suits and muu-muu dresses also marred the couture landscape, and fortunately have not reappeared in the retro ‘70s look that is back.

I indulged in this latest nostalgia jag after watching Woody Allen’s latest film, “Midnight in Paris.”  I enjoyed this movie for many reasons, not least of which is that at 102, Allen wisely cast an actor many generations his junior to be the role he always writes for himself: a thinking, ironically funny young romantic lead. This romantic lead is Gil (Owen Wilson), a writer struggling with his novel, who travels to Paris with his fiancée and her wealthy parents.  Paris turns out to be more than the quintessential city of lights; it is one of true magic.

Walking the streets alone at midnight, Gil is swept back in time, hobnobbing with literary and artistic luminaries of the past, including F. Scott Fitzgerald, Ernest Hemingway, and Gertrude Stein. These mysterious, enchanted evenings make Gil—already a nostalgia buff—even more wistful for the past, a time he imagines was friendlier to artists and writers like him. Of course, the farther back he goes in time, the more he realizes the limitations of the centuries of yore—for example, the lack of antibiotics and Facebook fan pages.

The movie’s gentle lesson reminded me that, as long-forgotten American politician George Ball once noted, “nostalgia is a seductive liar.”  Therefore, I am forcing myself to stop whining about times gone by and focus on the benefits of life in 2011.

Bear with me; I’m thinking.

Okay, got one! Today, constant Internet access from our smart phones has rid us of the need to ever be alone with our thoughts.  On second thought, maybe that’s not so good. But it’s hard to argue with such wonderful time-savers as online bill paying and easy access to pre-washed, pre-cut bags of fresh vegetables. And of course, for those who ultimately regret being tattooed like a freeway overpass, there is surgical tattoo removal.

I will keep thinking of things to be grateful for today, but I’m finding it hard going. I think I’ll take a break and read some Jane Austen.

Posted in Off My Noodle | Tagged nostalgia | Leave a response