The Point of Life: Amuse Yourself 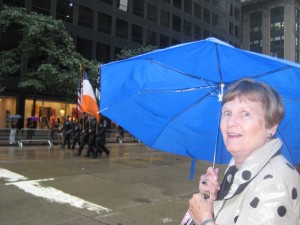 We could hear people screaming down the block. In Manhattan, that can mean a variety of things, some good, some horrible. But these screams sounded more cheerful than anything, despite the rainy summer Sunday afternoon, so my mom and I decided to walk up to the corner to see what was going on. As we got closer, we heard a marching band.

“I love parades!” my mom announced much like a five-year-old might. And so, this is how I wound up watching a parade emceed by someone speaking mostly in Spanish, in the rain, before the off-Broadway show we’d come into the city to see.

We stuck around to watch the NYPD band, an FDNY truck and a float. According to my mother, you can’t miss your chance to see a float. 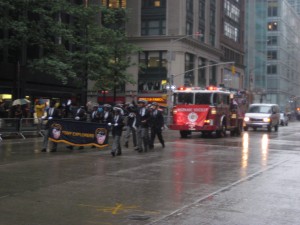 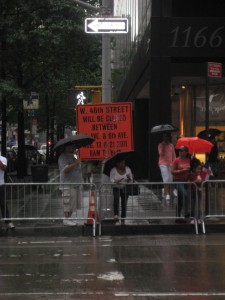 Suddenly, some particularly white bread-looking midwestern tourists in gleamingly white sneakers and shapeless rain jackets asked us what the parade was about.

“I think it’s the Hispanic Society,” I answered, pointing to a sign hanging from a fire truck. And then they stared at us a moment — two white women dressed for a Sunday matinee — and then at the African American kid with the skateboard next to us, and then at the emcee in the middle of the street shouting into the microphone like he was hosting a Univision variety show.

They seemed very confused. I, on the other hand, had the answer to a question that had been weighing on me for a few months, when another mom told me that her 12-year-old had asked her, “What is the point of life?” I guess she confided in me, because, as a cancer survivor, I certainly must have the answer. What she didn’t know is that when I was her son’s age, I wondered the same thing. Now some 30 years, two babies and a brush with death later, I can indeed supply the answer:

The point of life is to amuse yourself. If you can amuse other people along the way, all the better. Just watch “Ferris Bueller’s Day Off.” It’s all there.

Whether it’s something as simple as the car full of soccer players from the team I coach making faces at us on the highway yesterday after the game (We won, hence the good mood), or taking a few minutes to watch a parade, amusing yourself and the people you love will keep you from wondering what’s the point of life in the first place. Here’s proof: 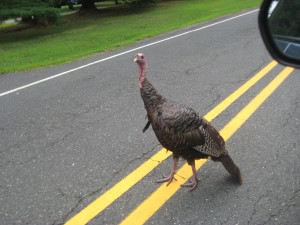 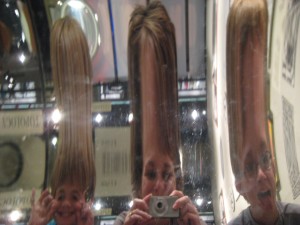 At the Museum of Science in Boston, we learned so much, our brains swelled. 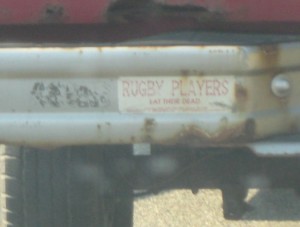 In college, I dated a rugby player, so I know this is true. 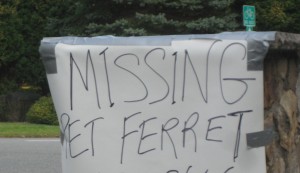 I dunno. I'm thinking it's been found, probably by a hawk, a fox or a coyote, though. 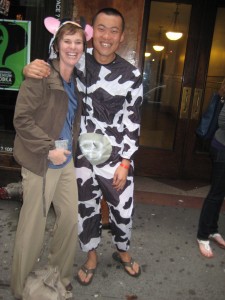 Speaking of New York, it is customary that when you come upon a man wearing a cow costume for no apparent reason, you must take your photograph with him.

Like I said, it’s all in Ferris Bueller. And according to Klout, well…

The next time my mom and I went into the city, we wound up stuck in my car, waiting for the attendant to get through the chaotic line in front of us. While we sat there, trying to figure out what the hold-up was, my mom deduced, “Maybe they’re giving out prizes!”

“Yes Mom. The line at a parking garage in Manhattan is because they are giving out prizes,” I answered through giggles.

Like I said, the point in life is to amuse yourself and the people around you. It appears that my mother figured that out a long time ago.

Posted in All in the family, Days Like This | Tagged meaning of life | Leave a response