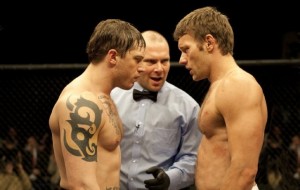 SYNOPSIS: The youngest son (Tom Hardy) of a recovering alcoholic and former boxer (Nick Nolte) returns home and asks his father to train him for a mixed martial arts tournament. It’s a path that puts the fighter in the ring with his estranged older brother (Joel Edgerton).

Sex/Nudity: A husband and wife kiss and hug. In one scene, she wears underwear and a tank top. Women in skimpy outfits are “ring girls” who display the numbers before each round.

Violence/Gore: The film revolves around mixed martial arts fighting, a brutal sport that includes kicking, punching, headlocks and body slams. Some fights are quick knock-outs; others are drawn out. Fighters are knocked out and/or seriously injured with a variety of bruises, cuts and wounded limbs. A character gets drunk and yells at a family member. A sub-plot involves Brendan’s students, who petition the principal to show the fight on a big screen at the school. Since that’s not allowed, the kids find an outdoor venue to show it.

Drugs/Alcohol: An alcoholic character falls off the wagon and is shown drunk and disoriented, with empty bottles strewn about a hotel room. References to a character’s pill-popping habit and a scene where he’s forced to relinquish his prescription bottles.

Will Parents Like It?  Warrior is one of the best films of 2011 so far, but because of the fighting and intense family drama, it’s best suited for kids 14 and older.

REVIEW: The name Warrior is kind of a misnomer, because you go into this movie expecting buff gladiators wielding swords against the enemy. It definitely has the buff guys, but they’re estranged brothers battling it out in a mixed martial arts ring.

When I first heard about this movie, I was excited at the prospect of seeing Nick Nolte on the big screen again. He’s had a few roles in recent years, but mostly voice parts, like Bernie the Gorilla in Zookeeper and Mulgarath in The Spiderwick Chronicles.

In Warrior, he really gets a chance to shine and remind us what a great actor he is, maybe because his role as a recovering alcoholic mirrors his own real-life struggles. Nolte has seven film projects in the next few years, so I hope Warrior signals his big comeback.

In fact, I see “Oscar” written all over his role of Paddy Conlon, the alcoholic father of two sons who are estranged from both him and each other. The youngest son, Tommy, is played by Tom Hardy, who has the soulful tough-guy role down pat. We learn that Tommy was a soldier in Iraq who went AWOL after saving other soldiers from certain death. A former high school wrestling prodigy, he shows up at Paddy’s door asking if his father would train him for Sparta, a high-profile mixed martial arts competition with a $5 million purse.

We also learn that Tommy moved away with his mother after she left the abusive Paddy years earlier. His older brother Brendan (Joel Edgerton) stayed behind, but eventually, he too became estranged from his father. Brendan married Tess (Jennifer Morrison) and started a family, but now they’re in danger of losing their home, even though they work several jobs between them, including Brendan’s gig as a high school physics teacher.

One night, former fighter Brendan goes back into the ring to earn some extra cash and ends up getting suspended for the rest of the semester. That’s when he decides to return to the ring full-time, a decision that ultimately brings him and Tommy together in the final fight at Sparta.

People will probably be comparing Warrior to last year’s The Fighter, and there are some similarities – family drama, down-on-their-luck fighters, struggles with alcohol/drugs, and brutal fight scenes where you can almost feel bones cracking.

While watching Warrior, I kept thinking of that line “you can choose your friends, but you can’t choose your family.” No matter what you do or where you go in life, you’ll forever be connected to your family, whether it’s emotionally, physically or spiritually. Sometimes you have to work through a lot of issues to get to a point where you can stand to be in the same room with each other.

Warrior doesn’t end with a family dinner and everyone vowing to work it out in therapy, but you get the feeling they’re taking a step in the right direction. It’s one of those movies where I’d really like to know what happens after the end credits roll, and I guess that’s the sign of a great film that’s sure to score a few nominations during next year’s awards season.

While rated PG-13, Warrior is best for kids 14 and older because of the brutal fight scenes and intense family drama. And it really is all about family, in more ways than one. In addition to the estrangement between the three main characters, we also see just how far Brendan is willing to go to ensure that his wife and kids have a home. It’s a story that will ring true to many families across the country during these tough economic times.

Jane Boursaw is a family entertainment writer specializing in movies and TV. Syndicate her family movie & TV reviews in your publication; visit her at Reel Life With Jane; follow her on Twitter; become a friend on Facebook; email jboursaw@charter.net

Posted in Reel Life with Jane | Leave a response