What You Wish You Could Tell the Playdate's Mom: Between the Lines 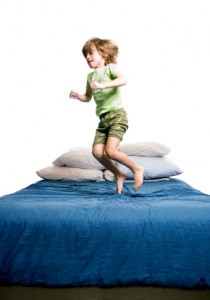 Oh, you’re here to pick up Ryan so soon?

after he cornered the cat with a toilet plunger and an evil grin.

Why, he’s such a creative child

judging by the “Electric Lime” crayon I just spotted on the wall behind you.

And so full of energy!

Not to mention Girl Scouts cookies, but you’ll discover the crumbs in his overalls later.

My little Jacob had a great time

learning how to climb up the bookcase like Spiderman. (Isn’t Ryan a little young for those movies?).

making coasters out of my CD collection while I was busy

cleaning up his “rocket ship,” a.k.a. an emptied garbage can and our wok.

Why, his imagination is unlike anything I’ve ever seen!

I mean, he looks at my tennis racquet and sees something else entirely.

Apparently, something waterproof, unlike my tennis racquet.

We’ll have to get them together again soon

at your house, lady, ‘cause I’m out of migraine medicine and paper towels.

Originally appeared in American Baby Magazine, and yet, it still makes me snicker.

What have your playdates unleashed?

Posted in Days Like This, Momma Said | Tagged playdates | Leave a response