OFF MY NOODLE: Saving Money the Old Country Way 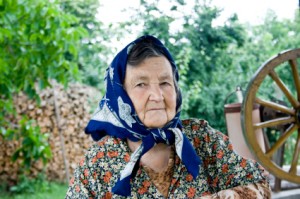 With the economy still on the skids, everybody is scrambling for ways to save greenbacks. But remember: tough economic times don’t last; people who aren’t embarrassed to rinse out plastic bags do.Both my grandmothers came from “the old country,” and trust me: There is no word for “disposable” in Yiddish. These Bubbies never met a piece of wrapping paper that they didn’t use at least 15 times. In fact, through her judicious use, rinsing, and re-use of aluminum foil, one of my Bubbies only used two rolls of foil during her entire life!

So read on, be of good cheer, and for gosh sakes’ don’t waste an entire sheet of fabric softener when you can cut the thing in half. Happy savings!

1. Don’t waste money on extravagances, such as electricity. Keep those lights off, even in the dark. This is no typical Jewish mother joke. You can save thousands, maybe even millions of dollars on electricity bills by using night vision glasses, which can be bought for cheap at any military hardware store. If a neighbor comes over to borrow a cup of flour and asks why everyone in your family is wearing night vision goggles in your dark house, just tell him you are practicing your emergency preparedness drills, recommended by a leading survivalist in Idaho.

2. Warm your house with black-out curtains.  When the cold weather comes, these keep out the cold and give your night vision goggles a real test of endurance, too. Look, if they were good enough for Londoners during the blitz, they ought to be good enough for you, too.

3. Reuse leftover oil from frying for dozens of household uses – Don’t even think of pouring this elixir down the drain! Dab your used oil on a dry cloth as wood furniture polish, put on a Q-tip to moisturize your cuticles, condition an old baseball glove, or even free a stuck zipper! Who knew?

4. Resurrect the fine art of bargaining. In many parts of the world, haggling over price is expected, and Professional Hagglers have their own competitive leagues. In today’s world, simply not paying retail won’t cut it. Why not go mano a mano with those little credit card machines in the stores? After the register has tallied your groceries and the credit card machine screen asks, “Is $163.98 okay?” don’t just press the “okay” button like a patsy, make a deal!  Star your counteroffer at $17.54 and test your money-saving mettle.

5. Instead of that spendy African safari you’ve been planning, go to the zoo this summer instead.Look, when you’ve seen one giraffe, you’ve seen them all. What, were you planning to count how many spots each one had? And let’s be honest: how many normal people do you know who like sleeping under mosquito netting?

6. Sell most of your worldly possessions on eBay. You know you’ll never wear that horrendous orange striped tie your mother-in-law gave you, and that set of Boggle that’s missing half the letter cubes? Fuhgettabouit!Turn your junk into cashola on eBay, where you’ll find buyers for the dumbest things on earth. After Passover, my friend Harry sold his swept up matzah crumbs in a Ziploc bag for $18 bucks! I don’t know what’s up with these eBay shoppers, but if they’re dumb enough to buy matzah crumbs from the floor, they’ll buy your broken toys, your van with no engine, and all your mate-less socks, too. Heck, offer that folding chair held together with only duct tape and with the screw sticking out of the seat pad and see what you get!

7. Shop at stores no smaller than football stadiums.Now that you’ve cleared out the clutter, you’ll have room for 25-pound sacks of rice, gallon containers of mystery shampoo whose ingredients are listed in Armenian, and vats of freeze-dried coffee. In addition to never having to shop for non-perishables again until you’re 108, you’ll get a great workout dodging those forklifts in these megastores zooming toward you. Worst case scenario? If everyone hates the weird-smelling Armenian shampoo, just sell it on eBay.

8. Cook as if there’s no such thing as “freezer burn.” If you have more days in the week than grocery money, concoct visionary meals such as “refrigerator soup,” a hodgepodge of anything you can find in the back of the fridge that doesn’t yet have anything growing on it. Be daring! Toss in the last few frozen fish sticks, half a can of kidney beans, flaccid celery (possibly still retaining a trace of vitamins even in this aged state), and Tobasco sauce and you’re in business. If your family complains, channel my long-departed Bubbie, who would say, “You want fancy? Okay, tomorrow we’ll have borsht.”

9. Don’t skimp on the essentials. With all this Draconian belt-tightening, make sure you still buy yourself an overpriced latte every day. Ignore that little voice in your head reminding you that over a year’s time, you will spend nearly $800 bucks on these drinks, money that could otherwise have filled your gas tank four or five times. But what seems like an indulgence is really just a way to ensure you’re still getting essential vitamins and nutrients — especially if you are living off of that cheap rice and “refrigerator soup.”

One response to “OFF MY NOODLE: Saving Money the Old Country Way”