REEL LIFE WITH JANE: The Smurfs 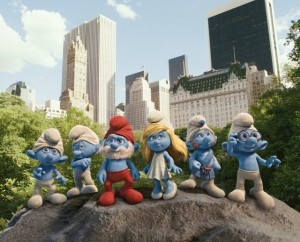 SYNOPSIS: Those tiny blue Smurfs are back in their very own feature film, and true to the 1980s cartoon, they’re still being chased by Gargamel and his cat Azrael. But when they tumble from their magical world smack dab into New York City, they have to figure out how to evade the evil wizard and get back to their village.

Sex/Nudity: A married couple holds hands, hugs and kisses briefly. The wife is pregnant, and baby references are woven throughout the movie (she gets an ultrasound). A girl Smurf stands over a subway grate a la Marilyn Monroe, and a male Smurf steps on the grate and makes a reference to cooling his private parts.

Violence/Gore: Cartoon violence, usually involving Gargamel chasing after the Smurfs. Gargamel puts his cat Azrael in harm’s way several times, then says, “Are you dead?” Gargamel destroys many homes in Smurf Village and chases the Smurfs into the forest. Azrael coughs up Smurf hair in a somewhat graphic manner. The Smurfs must cross busy streets in New York City, and in a climactic showdown with Gargamel, a few Smurfs are mildly injured. No blood is shown, though, and no one dies.

Profanity: A few uses of “damn” and “oh my God.” The entire movie riffs off the fact that “smurf” is used as an expletive: “smurf me,” “”smurf off,” and “you smurfin’ crossed the wrong smurf.” I’m not sure little ones need to be repeating all of that after they leave the theater.

Which Kids Will Like It? Kids 7 and older who like CG-animated/live action movies with lots of action.

Will Parents Like It? With the rampant potty humor and product placement, it’s a wonder they were able to fit a storyline in here. This movie took an innocent kids’ TV show and injected it with innuendos, one-liners and crude jokes. There are better family movies out right now, starting with Kung Fu Panda 2 and Mr. Popper’s Penguins.

REVIEW:  If you were a fan of the Smurfs TV series back in the 1980s, you might want to steer clear of this movie. In fact, even if you weren’t a fan, you might want to steer clear. Yes, the Smurfs are adorable. Yes, Neil Patrick Harris has a few funny moments. Yes, it’s cool hearing Jonathan Winters as the voice of Papa Smurf. But overall, the filmmakers rely way too heavily on crude humor, one-liners, and inappropriate references.

The story begins in the enchanted Smurf Village, where 100 of the blue, gnome-like creatures live in their little bubble of happiness. As they’re preparing for the Blue Moon Festival, the evil wizard Gargamel (Hank Azaria) and his cat Azrael plot to find and destroy the Smurf’s home. He’s after their youth-preserving essence, though you might miss this fact if you’re not paying attention.

Clumsy accidentally falls into one of Patrick’s boxes, and the other Smurfs follow him to the apartment where Patrick and his pregnant wife Grace (Jayma Mays) live. After their initial shock at seeing the tiny blue creatures, the couple realizes they’ll need to help the Smurfs evade Gargamel and return home.

If anyone could have done justice to bringing the popular 1980s cartoon to the big screen, it would have been Raja Gosnell, who also directed Never Been Kissed, Beverly Hills Chihuahua and two big-screen adaptations of Scooby-Doo. But alas, this movie is lacking in a variety of areas, including a plot that was surely drafted in about two minutes, the overabundance of crude humor, and the rampant product placement, including Samsung, M&Ms, Guitar Hero, Apple computers, Katy Perry’s song I Kissed a Girl, the list goes on…

Sure, there are a few laughs, like when the personality-named Smurfs joke about their relatives back in the village (“Nobody misses Passive-Aggressive Smurf”), and when Patrick begs them to stop singing that annoying happy song. There’s also a subplot about Patrick embracing fatherhood. I guess when actors start having kids of their own, they start making kids’ movies. Elton John, Julia Roberts, Tom Hanks, and Johnny Depp are just a few.

But unless you’re a major fan of all things Smurf, you can probably catch this one on DVD somewhere down the line. Because of the inappropriate content mentioned above, I don’t recommend it for kids younger than seven, even though its target audience should be much younger.

Jane Boursaw is a family entertainment writer specializing in movies and TV. Syndicate her family movie & TV reviews in your publication; visit her at Reel Life With Jane; follow her on Twitter; become a friend on Facebook; email jboursaw@charter.net