When Children and Bulls Roamed Free 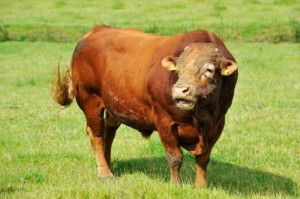 My cousin’s ankle was trapped under his bicycle, which was being weighed down by a bull named Boris. I don’t recall that Pete and I had climbed any fences to get to Boris. In fact, I do believe the bull was tied to a post outside the farmer’s market, as though he was someone’s pet labradoodle waiting for its owner to return with a bone. Nor do I recall ever thinking that perhaps the two of us, being kids and all, shouldn’t approach a full-grown bull, let alone bring along bags of sugar cookies with pastel-colored sprinkles on them.

While Boris helped himself to my cousin’s cookies, he pinned Pete down under the bike, and I looked around for help. But there appeared to be none. It was as though the adults in the parking lot didn’t notice or didn’t care that my 70-pound cousin was being held hostage by an 1800-pound bull with a penchant for baked goods. So I pulled and tugged at Pete untill Boris shifted, presumably to retrieve another cookie, and suddenly, I was able to pull Pete and his bike out from under Boris.

Pete dusted himself off, inspected the freshly bent seat of his new bike and off we rode (with no helmets, of course) back home, as though he hadn’t just been held hostage by an animal nearly as big as my mom’s Ford LTD station wagon.

Now that I look back at this event with the eyes of a mother, I can’t help but wonder: Where the hell were the grown-ups? Because if we pretend for a moment that a bull could be tied to a stake outside a New Jersey farmer’s market (now an A & P supermarket) in this safety-first era, we must assume the following:

Instead, Pete and I pedaled home, where I shared my remaining cookie with him, his having been eaten by Boris the bull. We attempted to unbend his bike’s seat with his father’s tools. We may or may not have mentioned the incident to our mothers.

Posted in All in the family, Days Like This | Tagged adult supervision, raising kids | Leave a response