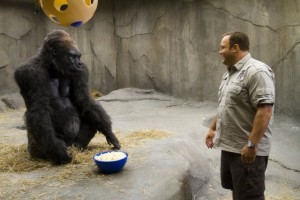 SYNOPSIS: When a zookeeper (Kevin James) is dumped by his girlfriend (Leslie Bibb), he decides to quit his beloved job and work at a car dealership in order to woo her back. All of this prompts the zoo animals to break their code of silence in order to help him find love again and get him back to the zoo.

Sex/Nudity: Griffin’s ex-girlfriend wears skin-hugging dresses and outfits. The animals make double-entendre jokes about showing a girl “the goods,” “thrusting out your loins,” and “taking her down.” One reference to “she had an extra claw and knew how to use it.” A man boasts how he “made out, hard” with his girlfriend. Jokes about a woman’s flexibility. A ballroom dance gets sexy. Griffin kisses two women at various times. He also “marks” his territory by peeing, both at the zoo and at a fancy party (by peeing into the plants!).

Violence/Gore: Lots of pratfalls and physical comedy. Griffin gets poked by a porcupine quill. People fall into pits with animals at the zoo (but no one is harmed). A bicycle race between Griffin and his nemesis gets heated as they ride into busy traffic and the nemesis wipes out. A gorilla tells Griffin that another zookeeper was cruel to him. Griffin seeks out the other zookeeper and hits him hard enough to break the wall plaster.

Which Kids Will Like It? Kids 9 and older who like physical comedy, movies with talking animals, or Kevin James’ brand of comedy.

Will Parents Like It? It’s kind of a clichéd story about being true to yourself and not changing to please someone else. There’s also the requisite amount of poop and pee jokes, ramped up a notch because we’re dealing with zoo animals. That being said, it’s also a sweet story with characters who really care about each other.

REVIEW:  Great family movies are tough to make. You have to come up with a premise that appeals to both kids and their parents, embed a nice takeaway message, include smart jokes that are also funny, and not dumb it down because “family movies aren’t supposed to be smart, for heaven’s sake!” Of course, we know that’s not true. Some of the best family movies are really smart and funny and all those things I just mentioned.

‘Zookeeper’ is kind of a goofy little movie that falls somewhere in the middle of all that. You go into it thinking, “Oh no, a Kevin James movie with talking animals. Nothing good can come of this.” And yet, something good DOES come of it. A sweet story about staying true to yourself when the one person you think you’re in love with is asking you to be someone else.

James stars as Griffin Keyes, a loveable guy with a job that’s tailor-made for him – head zookeeper at the Franklin Park Zoo in Boston. The movie opens with him getting dumped by his girlfriend Stephanie (Leslie Bibb) just as he’s proposing to her on a romantic beach.

Jump ahead five years and Griffin’s still not over her, so decides to quit working at the zoo and take a job at a car dealership in the hopes that he’ll become the kind of guy she wants – rich, stylish and materialistic.

In the process of wooing Stephanie back, Griffin uses his sweet coworker at the zoo Karen (Rosario Dawson) to make her jealous. One of the sweetest scenes takes place at a wedding reception where Griffin and Karen try to one-up Stephanie and her new man (Joe Rogan) on the dance floor. Except it turns into a lovely and graceful dance – well, until Griffin ends up knocking the bride over and smashing into the ice sculpture. Kind of saw that coming.

But most of the movie takes place at the zoo, where Griffin discovers that the animals he’s been taking care of for years can actually talk. Talking animals should be a really dumb premise, but the voice cast makes it all worthwhile: Cher (a lioness) and Sylvester Stallone (her mate); Maya Rudolph (a giraffe); Don Rickles (a frog); Faizon Love and Jon Favreau (bears); and Adam Sandler (a monkey).

But the best casting is Nick Nolte as a gruff old gorilla named Bernie. Every time he spoke, all I could think of was Nolte’s no-nonsense Jack Cates from ’48 Hours.’ Of course, kids (hopefully) won’t have seen that movie, so his role as a lonely gorilla is a little insider joke for the rest of us. I’ve missed seeing Nolte on screen, so I’m happy to see he has a half-dozen films lined up in the next few years.

Ken Jeong, who plays Senor Chang on NBC’s ‘Community,’ plays a goofy and slightly creepy zoo employee (because if you need a goofy and slightly creepy character, I guess you automatically turn to Ken Jeong). And Donnie Wahlberg plays Shane, a zookeeper who isn’t as nice to the animals as Griffin. I admit I was happy to see Shane get what’s coming to him; on the other hand, violence to counteract violence isn’t a good thing to teach kids.

Look, there’s nothing new here. You know how ‘Zookeeper’ is going to end, and it’s pretty easy to guess how it gets there. I’m not going to tell you to rush out and see it, but here are still some sweet moments – and a soundtrack that includes T Pain’s ‘Low’ and Rush’s ‘Carry on My Wayward Son’ — that make it a cute flick for both kids and adults. Stay through the credits to hear Cher and the rest of the cast sing Boston’s ‘More Than a Feeling.’