Is the Breastfeeding Doll UnAmerican? 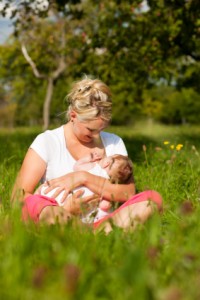 See? Breastfeeding is so natural, you'll want to do it in a meadow.

I appeared on Wall Street Journal Radio’s The Daily Wrap with Michael Castner last night so I could say the words “breasts” and “sexualization” on the air. The U13 boys’ soccer team that I coach would have snickered. I’ll bet a few adults did, too, which is exactly why Bebé Glotòn, a doll that breastfeeds that’s come from Spain to American toy stores, is news in the first place.

I know I’m supposed to go on about how breastfeeding is natural and all that. Parenting writers are ingrained to preface all such discussions with the words “breast-milk is best.” That little girls can’t make breast-milk is irrelevant, I guess, just like it didn’t matter than my sons didn’t have driver’s licenses when they rode their toy cars around our driveway.

As I mentioned on the show last night, girls (and some boys) use their (far less expensive) dolls to imitate their mothers when they breastfeed anyhow, which is all fine by me.  But there truly is something creepy about this doll, and I think it’s in the halter top that comes with it. See?

There are pink fabric daisies in lieu of nipples on a halter top.

Just writing that felt disturbing. Seeing it makes me want to put on a turtleneck sweater, even in 90-degree weather.

The halter top reminds me of those flowery, pastel-colored booklets our mothers gave us to explain about our new “friend” who would be arriving monthly starting in middle school, and yet also “Clockwork Orange.” But at least there are no realistic nipples sewn onto it. (The halter top, that is. I don’t know what the hell happened in “Clockwork Orange,” because I walked out of the movie theater after about 20 minutes.)

But I know the breastfeeding doll bothers Americans because, as I said on the radio last night, we have sexualized breasts to the point that seeing a baby eating from one often makes us giggle or get all creeped out. When Victoria’s Secret models’ breasts practically pour out from storefront signs into the mall, it’s fine by us. But a mom sitting on a nearby bench feeding her baby from her breasts? Not so much.

But I just can’t get over that halter top. I guess it was thrown into the box so the “Gluttonous Baby” dollmakers could charge the $118 it’s going for on Amazon right now. Sure, it sucks (literally), cries and even burps, which my boys’ soccer team would appreciate most of all. But for that price, why not just use a regular old doll and no creepy halter top like generations of girls have done before? Well, for two reasons:

What do you think? Is the doll creepy or educational?

7 responses to “Is the Breastfeeding Doll UnAmerican?”