Not a Trip, but an Actual Vacation for Mom 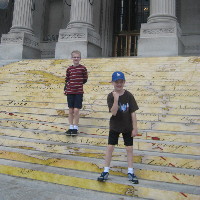 For a long time, I didn’t go on vacations. I went on trips. I pretty much packed up the kids and their stuff and moved what I did everyday to another location. If I was lucky, it wouldn’t take long to get to that location, or else I’d have to map out potty stops and thwart major meltdowns every 30 minutes or so.

But then came Philadelphia. And I’m happy to report, it appears that my vacations are back.

Last week, I took my sons to Philadelphia for a short trip. Or at least I thought it was going to be a trip and not a vacation. I pictured spending my two nights, three days breaking up fights and cajoling my kids to stand in line to see the attractions while they whined a lot. That’s how our trips used to be, but all that has somehow changed.

On the two-hour ride down, the boys and I played the license plate game, where you spot a state’s plate and then mark it down. Turns out, we found the most variety in the hotel parking garage, but we had fun playing, anyhow.

When we got there, we checked in, slathered on sunscreen, and headed over to see the Liberty Bell. Then we walked over to the National Constitution Center, where my tweens sat quietly and intently through a 30-minute presentation called “Freedom Rising” that, in earlier years, would have caused them to squirm and stage-whisper, “Can we go now?”

We went on a trolley ride, which turned out to be the wrong trolley ride, but the kids didn’t care. Then we took the trolley I’d planned and met up with my cousin, who lives in Philly, at the Comcast Center, where the boys sat mesmerized, watching the 25-foot tall high-definition video wall in the lobby that features cool shots of dancers, sports figures, fountains and giant gears, among others.

They didn’t run around pushing each other into other people’s way, darting off toward danger or otherwise forcing me to chase them while apologizing to my cousin. In fact, she and I actually finished sentences – paragraphs, even – while my kids watched the screen. And then they talked to my cousin – and not about poop, either. Amazing.

The next day, we visited museums, tourist attractions, gift shops and restaurants that hand out cloth napkins. We never looked at children’s menus, and I never had to say, “But it’s history. Don’t you want to see Ben Franklin’s grave?” They did, and we went.

After a dip in the hotel pool, they dressed up in their khaki pants and button-down shirts – their choice – and accompanied me at my cousin’s house where she offered to put on a video for them to keep them entertained. But they wanted to play with the cat and help make burgers. Meanwhile, I sat down and caught up with my cousin and her husband after their baby went to bed.

On the way home from what turned out to truly be, for us, the City of Brotherly Love, my boys read books that we’d bought at an independent bookstore before we visited a World War II submarine. And when we got home, I didn’t feel like I needed a vacation from my vacation. Rather, I’m happy to report, my trips are all but over and my vacations are back.

Posted in All in the family, Boys will be boys, MommaSaid Classic | Tagged kids, travel, vacation | 3 Responses

3 responses to “Not a Trip, but an Actual Vacation for Mom”

Leave a Reply to karla Click here to cancel reply.