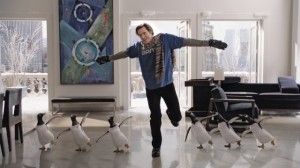 SYNOPSIS: Tom Popper is a divorced, workaholic real estate shark who doesn’t mind evicting people from beloved New York City landmarks to make way for new skyscrapers. But things start to change, including his relationship with his ex-wife and two children, when he inherits six lively penguins and transforms his luxury apartment into a winter wonderland.

Sex/Nudity: Tom’s ex-wife has a boyfriend, but you can tell there’s still a spark between her and Tom. They go on a couple of dates and eventually kiss. A reference to Viagra (Tom proclaims his vigor and “Viagra-tality”). A teenage girl hopes a boy will ask her to a school dance. An affectionate penguin is jokingly accused of fathering the eggs of three different penguins.

Violence/Gore: It’s a Jim Carrey movie, so expect plenty of slapstick humor and physical comedy. A zookeeper is hit in the face – with his own hand. Penguins cause havoc everywhere they go, including disrupting a fancy gallery event and knocking people over.

Profanity: Fairly mild, but lots of references to penguin “poo” and “pee” (and a few scenes of actual penguin poo). Also mild insults like “dumb,” “stupid,” and “crazy.”

Drugs/Alcohol: A reception at an art gallery includes alcohol. People drink champagne at a fancy party.

Which Kids Will Like It? Kids six and older who are familiar with the book by Richard and Florence Atwater or who like Jim Carrey’s family-friendly movies or physical comedy.

Will Parents Like It? It’s a really cute, but predictable, movie that’s fun for both kids and adults.

REVIEW: I came home from ‘Mr. Popper’s Penguins’ surprised at how much I enjoyed this movie. The reason I say that is because you usually know what you’re getting into with a Jim Carrey movie — some goofy faces, lots of jokes that either hit or miss the mark, perhaps a scene where he topples over a chair. If it’s a family movie, expect a heartfelt talk in there somewhere.

‘Mr. Popper’s Penguins’ has all this, but it also has … penguins! Cute, cuddly, emotional penguins who tear at your heartstrings and make you love them in all their adorable penguin-ness. Yeah, I realize penguin-ness isn’t a word, but this review needs that word, so there you have it.

Carrey stars as Tom Popper, a successful commercial real estate developer in New York City who will do whatever it takes to seal the deal, with help from his faithful assistant Pippi (Ophelia Lovibond), who speaks solely in alliterations beginning with the letter P. You get the feeling that Tom’s workaholic tendencies are the reason behind his divorce with ex-wife Amanda (Carla Gugino), giving them shared custody of their two kids, Janie (Madeline Carroll – loved her in ‘Flipped’) and Billy (Maxwell Perry Cotton).

But things start to change when Tom gets an unexpected inheritance from his deceased father – six penguins who are like fish out of water in his New York apartment. He’s just about to turn them over to the Central Park Zoo when Billy arrives, thinking they’re a birthday present for him. So Tom decides to keep the birds in his apartment, which, of course, causes all sorts of mayhem.

Here’s where you see that Tom isn’t some ruthless guy with a cold heart. He really loves his kids. He just doesn’t know how to interact with them, because his own dad was absent during much of his childhood. But soon, Tom isn’t keeping the birds just for the kids. He actually becomes attached to them.

And, as mentioned, the penguins – a mix of real and CGI birds – are completely adorable as they follow him around, leaving chaos in their wake. One of the best parts of the movie is the birds’ fascination with watching old Charlie Chaplin movies on TV. Way to include a comedy legend in a family movie.

All of this has dire consequences for Tom’s business, because he’s supposed to be wooing the elderly Mrs. Van Gundy and convincing her to sell her prime real estate — Tavern on the Green. She’s played by Angela Lansbury, 85, and how lovely to see her in this perfect role.

I haven’t read the book by Richard and Florence Atwaterthis movie is based on, but I’m guessing since it’s 70-some years old, the story has been updated for modern times. And that’s ok, because the movie’s message is timeless – that family is more important than any job and it’s ok to daydream and think outside the box.

‘Mr. Popper’s Penguins’ has the sort of predictable ending you’d expect from a classic Disney film starring Angela Lansbury, but I’m ok with that. I would have been disappointed if it had ended any other way. It’s a solid comedy that’s entertaining for the whole family and on-target with the PG rating.