The Kids Grow Up. Now it's Dad's Turn. 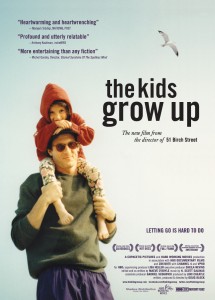 The entire time I was watching a review copy of HBO’s The Kids Grow Up, which premieres today  at 5:15 p.m. ET/PT, I felt the angst of entire generation…of parents.

The award-winning documentary filmmaker Doug Block, whose 2006 51 Birch Street won critical acclaim, set out to chronicle the emotionally fraught year before his only child, Lucy, left for college.

In the documentary, Block intersperses conversations he has with Lucy at various ages into what is supposed to be a coming-of-age story for his daughter. Here’s Lucy at two. Here’s Lucy at eight. Here’s Lucy at 12. Here’s Lucy’s French boyfriend. Only, the bigger story here is Block’s difficulty in letting go of Lucy and letting her grow up. And it’s all too typical of this generation of parents.

In the film, Block spends a lot of time lamenting that Lucy has grown up and is about to leave the nest. Lucy, on the other hand, spends much of her on-camera time at age 17 trying to get her father to turn the darn thing off. By the time her parents drop her off at a college in California, it’s no wonder she decided to move 3,000 miles from home — and Dad’s camera.

Yet Block’s experience is all too typical of this generation of parents, who railed against the laissez-faire-pile-them-in-the-station-wagon-with-no-seat-belts parenting of their own moms and dads by inventing the Helicopter Parent. Our parents’ generation barely knew where we were half the time; our generation tries to be our kids’ BFFs.

So when Block’s wife, Marjorie, explains to her husband on camera the difference between love and attachment, I felt a sigh of relief. Finally, somebody stepped up to explain why Block’s hovering and hyper-focusing was over-the-top — and not healthy for either Lucy or for him. But it would take Block the rest of the movie to sort that one out.

I’ve long said that we parents are raising our children to leave us (and not to be repelled by us). Certainly, I have a different perspective, having faced the very real possibility that I wouldn’t even get to see my kids grow up. But the kids do, indeed, grow up. If only the parents would, too. If you’re still raising your kids, watch The Kids Grow Up, a cautionary tale for the next generation of parents.

You can watch the broadcast premier of The Kids Grow Up Father’s Day on HBO (check your local listings for exact times) or pre-order the DVD available on 7/19.

Posted in All in the family, Momma Said | Tagged review, The Kids Grow Up | Leave a response