The Antidote to Suburban Parenting — Part 2

There were about 20 people, mostly white, dressed in what appeared to be traditional Indian garb in front of the Donut Plant on 23rd Street in Manhattan on Saturday night.

“What’s with the faux Indians?” I asked my brother, Scott, who was heading — finally — to the Champagne bar, Flûte, with me. I was indignant on behalf of people of Indian descent everywhere.

“You never see this kind of stuff in the suburbs,” I noted. Nor do you see this very often, or at least, I don’t: 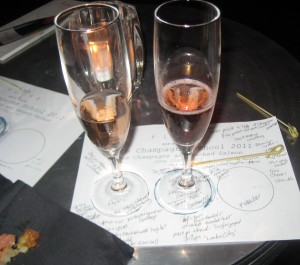 It had taken us two years since I had written about the Champagne bar that had once sent me alluring e-mails while I watched  fourth graders get sneezed on by a giant plastic nose to actually get to Flûte and sip some bubbly with my brother.

It just never seemed to work out for us until this past weekend, when my kids were camping with their dad and the Boy Scouts, and Scott was available to join me to sit around in plush seating and taste rosé Champagne while noshing on smoked salmon.

Though Fabien has left Flûte, Herve filled in for him, first by putting us on the VIP list (merci!), and then by regaling us with stories of his many visits to French Champagne houses. Thanks to Herve, we learned:

And after an hour at Flûte, we were feeling pretty good about it. 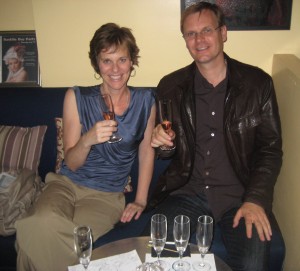 Also, about the most excellent salmon, which came from Petrossian on 54th Street. I was pedestrian enough to ask for brochures for Petrossian, only to discover that everybody who’s anybody in Manhattan is well aware that they are famous for their fine caviar, and therefore, require no leave-behinds. (Hey, if you need to find a pizza place that can accommodate 17 boys in cleats, I’m your girl. Caviar? Nope.)

Alas, our class came to a close, as did listening to, ironically, “London Calling,” while we sipped Champagne. We left Herve and Flute to have dinner at Ciano, where one of Scott’s friends works. Then we left the city where people sit around and taste-test Champagne.

“We have to do this again sooner than two years,” I suggested to Scott.

Perhaps we’ll have to check out what the fuss was about Donut Plant, too.

Posted in All in the family, Momma Said | Tagged Champagne, suburbs | Leave a response