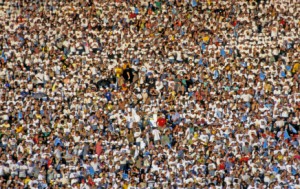 This isn’t the crowd at the birthday girl’s party, but it is a reminder to make sure your teens are careful when they click.

Remember in high school, when you’d go to  party at a house where the parents were away and the phone would ring? What would happen? Everyone would say “Shhhhhhhh!” And the host or hostess would answer the phone trying to sound as sober as possible, because with no caller ID, he or she had no idea if it was the ‘rents calling from their trip. Then it would turn out to be a telemarketer, and the football players would yell obscenities at the phone.

Ah, those were such simpler days of parenting.

Nowadays, parents have to worry that one wrong click on Facebook will bring a mob of strangers to their front yard. According to the Huffington Post, a German teen “forgot to mark her birthday invitation as private on Facebook,” and ended up with 15,000 people accepting her invitation, which had gone viral, online.

When her parents found out what had happened, they made their daughter cancel the party, informed the police and hired private security, reports the Huffington Post. Still, some 1,500 people showed up at their Hamburg home, some with presents and even a homemade cake, and, if the photo at HuffPo is a good representation, most were young and male.

Despite the need for 100 police officers, some on horses, and the two fires that firefighters needed to extinguish, police spokesman Mirko Streiber reportedly said that “nonetheless the party was a hit.”

Yeah, not so much for Mama and Papa.