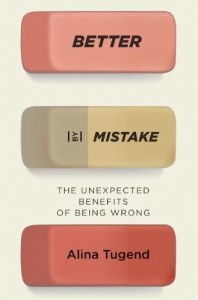 When I read Alina Tugend’s “Better by Mistake: The Unexpected Benefits of Being Wrong,” I felt vindicated. Finally, someone has provided proof that society’s push to praise kids actually lowers ambition. I caught up with Alina, who writes the “Shortcuts” column for the New York Times, to ask her why she believes mistakes can actually make kids become better adults. — Jen Singer

Q. In “Better by Mistake: The Unexpected Benefits of Being Wrong,” you cite research that found that children who are praised for being smart are often less willing to take chances. What does this mean for today’s children?

A. Carol Dweck, a Stanford University Professor of Psychology, has done groundbreaking research on children and how they learn to avoid or accept mistakes. One of her experiments involved 400 fifth graders. They were given a fairly easy test; half were praised for being really smart for doing so well on the test, the other half praised for trying hard. Then they were asked if they would next like to take an easier or more difficult test.  The majority of those complimented for being smart chose the easier task, but 90 percent of those praised for their effort selected the more challenging test.

This shows us that we need to put more emphasis on effort and less on results when talking and praising our kids. That we need to be careful of only appearing to care about the good grades, the soccer goals scored, the music awards.  We have to learn and teach our kids to put value on the process.

A. If kids fear making mistakes, they are less willing to take risks and chances, to try something challenging, to step outside their comfort zones. Of course, we don’t want our kids to make the same mistakes over and over – they need to learn from their blunders. But they can’t fear ever goofing up or failing.

We know now that what creates children – and adults – with good self –esteem is not gold stars and trophies for everyone, but rather resilience. That means our children must know from a young age that they can make mistakes and fail and not be crushed by the experience. Because everyone is going to face setbacks in life – successful people are those who bounce back.

Q. What is the implication of understanding the difference between ability and effort, especially among Americans?

A. Too many Americans- and I say Americans because this is not a universal concept – believe that we either have a certain talent or ability or we don’t: she’s a good writer, he’s a terrific baseball player.  Professor Dweck refers to this as a fixed mindset. We don’t believe we can really change or develop in any meaningful way. And if we have a fixed mindset, then mistakes play no role except to show us we’re stupid – because we don’t truly believe we can learn from them.

However, if we believe that all of us can improve and develop our brains, our skills and our talents, if we believe that effort is more important than ability, then mistakes play a key role because we learn from them. Professor Dweck calls this a growth mindset and her research has shown that when children are taught about growth mindsets and the role of effort, they’re more motivated and often perform better.

I’m not saying that we tell our children that we all have equal talent, but rather that we all  have far greater potential than we believe we do. And that to develop that we need to work hard, take risks – and yes, make mistakes.

Q. How has the recent and pervasive pressure to raise perfect kids played into the idea that children should be spared from making mistakes?

A. Too many children feel  if they’re not perfect, then they’re  failure and losers.  Teachers have told me they see a lot of high-achieving  students who are “victims of excellence” because they’re so afraid of getting something wrong that they don’t try anything new. We all give lip-service to the idea that “no one’s perfect” and “to err is human,” but sometimes the covert message we send our kids is that they should be flawless.  Mistakes are seen not as part of the process of learning, but as bad, because all that matters is perfect results.

Also, too often children who believe they must be perfect give up when faced with a difficult task because they think that making mistakes is wrong and if they can’t learn something almost effortlessly, then they shouldn’t try. These children are deprived of that great feeling of mastering a difficult skill or task.

Q.  How can parents and teachers begin to let kids learn by mistake?

First of all, we need to truly believe in our gut that it’s okay to make mistakes. Then we need to learn to not step in and try to fix things whenever our children mess up.  Of course, we can’t let our child run across a busy street just to teach her a lesson, but as parents, we tend to step in too often. If your son left his lunch behind, if your daughter forgot to study for a test- let them figure out how to resolve the problem. This doesn’t mean we never try to help our children when they’ve goofed up, but we have to learn to live with the reality that they must make mistakes and learn how to resolve them. They will be unhappy or uncomfortable at times, and as painful as that is for us as parents, it’s a necessary part of growing up.

Teachers can help by making mistakes more a part of the learning process. They don’t need to  correct wrong answer right away, but examine why the student came to that answer. Too often in the rush to get a right answer, children fail to understand the underlying concepts. As one excellent teacher said, she believes that  students’ flawed answers are not errors, but partially correct solutions with underlying logic. She has her students share their mistakes, and they were eventually able to see the mistakes as part of  the learning process. They weren’t unhappy when their flawed solutions were shown to the class; rather they were motivated to understand and correct them together as a community of learners. 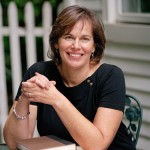 Alina Tugend has written the biweekly consumer column “Shortcuts” for the New York Times business section since 2005. She earned a bachelor’s degree from the University of California, Berkeley, and a master of studies in law from Yale Law School. She lives outside New York City with her husband and their two sons. Visit her site at AlinaTugend.com.