Free to Be Me, Minus the Toy Vacuum 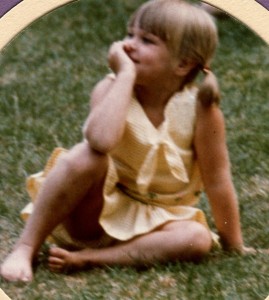 Where did I put my shoes?

By the time we got to the, I dunno, fourth video of my brother and me opening presents in matching red Christmas pajamas, I had become disgruntled.

“Vacuum. It’ll be a vacuum,” my brother Scott predicted as we watched old home movies with our parents this weekend. On the screen, I was opening a present on my sixth Christmas morning. I had previously received a toy ironing board and iron while Scott got something cool involving wheels and camouflage and, I presume, sound effects. (Apparently, our video camera had no sound capabilities back in the day.)

“Dammit!” I yelled, and my family laughed.

“Maybe next year you’ll get a mop,” Scott offered.

I know it was the seventies, but c’mon, Mom and Dad. Except for a short period during which I insisted on wearing black patent leather shoes everywhere, I was a tomboy. I never played with Barbies, and I prefered to hang out in the (precariously built, I might add) tree-house next door at my grandparents’ house. I even played street hockey with my big brother and his friends well into high school.

So, what’s with all the housewife-in-training gear? And why did I seem so happy to receive them when, eventually, I’d ask for (and receive, thank you very much) a race car track set? (Which prepared me for what, exactly? A career in NASCAR?)

From what I can remember, my parents never treated me differently from my brother simply because I was a girl. I, too, was expected to get good grades and go off to college to train for a career. Like Scott, I played soccer –when girls’ soccer finally came to town a few years after boys’ soccer, that is. I even played Little League baseball. Sure I was the only girl on my team, and one father took it upon himself to heckle me while I played first base. But surely I wasn’t the toy ironing board type of girl.

Remember, this was the Free to Be You and Me decade, when Marlo Thomas and friends assured girls like me that we would all grow up to be our own women, hand in hand in a land where the river runs free. Also, where the girl in black patent leather shoes who insists on “ladies first” ends up getting eaten by tigers.

So how come I started out with girly-girl toys and ended up with my own pretty successful business, built around my kids’ schedules? How come I can’t iron all that well after all that? And why I didn’t get eaten by tigers?

I suppose the answer is that I really was free to be me, even if that me started out seemingly enamored by toy household appliances and — dammit! — a toy baby carriage. Eventually I found the real me, and she doesn’t care to vacuum, but she still likes black patent leather shoes. And that’s all a girl can ask for.

Posted in All in the family, Momma Said | Tagged feminism, girls, growing up | Leave a response