I’m getting busy for my big speech at the ASJA this weekend, so I’m running this old Good Housekeeping piece. I was reminded of it when I read this New York Times’ article today, “College Teams, Relying on Deception, Undermine Gender Equity.” Tell me what you think. 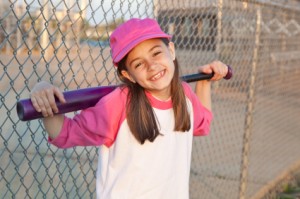 One of the fathers was yelling at me – something about how girls don’t belong on a baseball field. But I didn’t budge. I just kept catching and throwing the balls that the boys on my Little League team were throwing to me. I’d played ball plenty of times with my big brother, so, I thought, why couldn’t I play with boys my own age? Half of them couldn’t throw anyway, including that guy’s son. But I could.

It was 1974, and I was one of the first girls to be allowed to play Little League baseball in my hometown. A handful of my girlfriends played, too, but they were all on other teams – like me, the only girls on their teams. At seven, we were bigger and often, better, than the boys, and that’s probably what annoyed that father so much. That, and the fact that I was playing first base while his son was in the outfield.

I was thinking about my Little League team on Saturday morning when I pointed to a teenage girl on one of the fields where my son, Chris, 10, plays indoor soccer.

“See how she slaps the ball down and then dives on it?” I asked Chris. “If a ball comes at you too hard to catch, do that,” I said. And then we watched a teenage boy fire another ball at her, and she dove on it.

One of two girls playing soccer with four boys on a short practice field, nobody seemed to care that she was out there. In fact, both girls were on the same team; they hadn’t even split them up. When they finished playing, all the teens high-fived each other and walked off the field together. My son watched them go by.

Soon, he took the field with nine other boys his age for a skills practice and a scrimmage. On the field next to him, some younger girls, most of them in pink sweat-suits, were chasing their coach and trying to get the ball away from him. They screamed that little girl scream – the kind that curls your hair and induces tension headaches – as they stole the ball and dribbled down the field.

Back on my son’s field, though, there was no screaming. There was some elbowing and an occasional lost shoe as they ran after the ball, but there was no acknowledgment of the girls over on the adjacent field. It seemed that they belonged there, just like the boys did.

I thought back to my hometown’s 1974 Memorial Day Parade when my girlfriends and I, in our baseball uniforms and ponytails, passed by our mothers, who cheered fanatically as though Elvis had just sauntered by or something. I remember thinking, “What’s the big deal?” We’d just seen them at the start of the parade, after all.

I thought about telling Chris that story, and the story of the father who’d yelled at me to get off the baseball field, but I knew he’d just think, “What’s the big deal?” What’s the big deal about girls playing sports with boys? And I wanted to keep it that way – for him, and for the girls on baseball and soccer fields everywhere. They know they belong there. And now, the boys know it, too.

Tell us what you think.