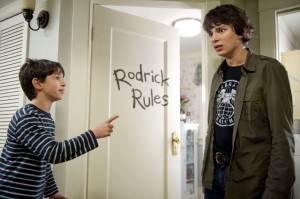 SYNOPSIS: Back in middle school after summer vacation, Greg Heffley and his older brother Rodrick must deal with their parents’ misguided attempts to have them bond.

Sex/Nudity: Some flirting involving Greg’s crush on a new girl in school. Rodrick flirts with a teenage girl at a party.

Violence/Gore: Rodrick teases, threatens, and picks on Greg all the time. In one scene, they fight physically. In another, Rodrick drives wildly through town as Greg and Rowley fly around in the back of his van. Rodrick locks Greg in the basement during a party.

Drugs/Alcohol:Teenagers drink from cups at a wild party (though the contents of the cups are never revealed). Rowley lip-syncs to Ke$ha’s ‘Tik Tok,’ which includes lyrics about partying and drinking.

Which Kids Will Like It? Kids 9 and older who liked the first movie or the book series.

Will Parents Like It? It bugs me that Rodrick threatens and teases his little brother mercilessly, but things work out in the end.

REVIEW:  I went back and read my review of the first ‘Wimpy Kid’ movie (check it out here), and see that I gave it 3 out of 5 Reels, lamenting the fact that it was rife with gross-out humor. Well, the book series is based on life in middle school, so of course there’d be gross-out humor, right? My grown-up brain may be foggy, but I don’t remember that much gross-out humor when I was a kid.

At any rate, ‘Diary of a Wimpy Kid: Rodrick Rules’ gets much the same critique from me. In this go-round, Greg Heffley (Zachary Gordon) is back in middle school after summer vacation. He and his sweet and trusting buddy Rowley (Robert Capron) are now in seventh grade and still trying to navigate the popularity contest. In particular, Greg has a crush on a pretty new girl Holly Hills (Peyton List), who crushes his dreams by mistakenly calling him Fregley, the geekiest kid in school.

But this movie is mainly about the relationship between Greg and his older brother Rodrick (Devon Bostick). Surely Rodrick is the most psychologically abusive older sibling since Bette Davis in ‘Whatever Happened to Baby Jane.’

He does stuff like lock Greg in the basement while he throws a party upstairs, drive wildly through town as Greg and Rowley are tossed about willy-nilly in the back of his van (where’s a cop when you need one?), and place a chocolate bar on the car seat where Greg sits, so he’ll be completely humiliated when everyone at church thinks he pooped his pants.

But that’s where my mom-ness is showing, because all the way through the movie, I’m thinking, I hope MY kids don’t act this way! That’s horrible! And the fact that their parents (Rachael Harris and Steve Zahn) seem completely clueless just doesn’t sit right. Parents know when stuff is happening.

But according to their mom, they just need to spend some quality time together, so she engineers a program where each boy gets a “mom buck” for every hour they spend together. When she starts them out with five mom bucks each, Rodrick immediately calls her bluff and gets her to cash them in for real bucks right away. Meanwhile, Steve Zahn’s comic brilliance is completely under-used when he’s relegated to nodding and glaring in various directions. His dialogue is limited to about five words throughout the entire movie.

It may be that ‘Diary of a Wimpy Kid: Rodrick Rules’ just isn’t my kind of movie, because I had mom-friends tell me they laughed all the way through it with their kids. And it does have a few highlights, like Rowley lip-syncing to Ke$ha’s ‘Tik Tok’ and Greg and Rodrick eventually finding a way to get along. But overall, it just made me sad to think of all the disenfranchised middle schoolers being abused and insulted. I hope it gets better for them.