OFF THE NOODLE: Diagnosis: Male 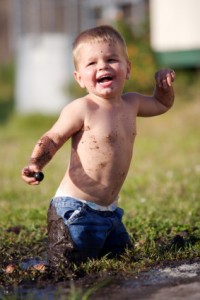 When my kids were younger, I always got a little jumpy whenever anyone called from  school, even though they were sure to begin by saying, “There’s nothing to worry about, Mrs. Gruen, but. . .” (Why was there always a “but?”)

Usually these calls meant that one of the offspring has sprung a fever or been gripped by a stomach ache, often coinciding with a test. Over the years, I also received my share of calls to report minor misbehavior in class. Oddly, I found this reassuring. I mean, perfectly behaved kids aren’t normal. I like “normal.”

These years are behind me now, and I couldn’t be more relieved. With three sons (and one daughter), I’m glad my kids were born before much of classic boyish behavior became syndromized, and given clinical names.

However, my poor friend Joni, whose kids are much younger than mine, is dealing with this right now. This morning, just as she was going to hop into her mom-mobile to hit the gym, the caller ID on her BlackBerry showed the school’s number. Like all moms in the same situation, she instructed her stomach not to lurch needlessly and answer the call. Her 6-year-old son’s teacher, Ms. Willett, dispensed with any preliminaries and said, “We need to talk about Kyle.”

I’ll let Joni take the story from here: “I was so freaked out that I couldn’t even feel any relief that I wouldn’t make the spinning class, which I really hate anyway. Twenty minutes later I sat across from Ms. Willett in the classroom and listened as she listed Kyle’s many offenses. These included singing ‘Climb Aboard the Space Ship’ during ‘quiet time,’ sneaking his fruit snacks into the rabbit cage, and pulling down his pants during Sharing Time.

“I admit, the flashing incident came as a shock, and Bill and I will speak to him about this in no uncertain terms. But honest to God, what else do teachers expect? She had just finished teaching a unit called the ‘Joy of the Body’ and had begun one on the ‘Joy of Spontaneous Delight.’ She can’t have it both ways. If she wants to teach a bunch of 6-year-olds about the joys of spontaneity she’s asking for it, especially with boys.

“But the final straw was the previous day’s visit by two members of the Fire Department and their tour of a real fire engine. I thought: uh-oh. Nothing excites Kyle more than seeing fire trucks and fire fighters in uniform, not even pulling down his pants during Sharing Time. He was so excited that he kept shouting out questions at the firefighters, without raising his hand. Then he cut in front of Amber while waiting his turn to climb up on the truck, and she burst into tears.”

Ms. Willett told Joni that these behaviors indicated that Kyle may have “control issues” and required more “sensitivity” on matters of gender. In addition to remediation in these areas, she recommended that Joni have Kyle tested for ADD. And that’s when my friend could take no more.

“I was so angry I bolted from my small yellow plastic chair and knocked it over,” Joni said. “Ms. Willett must think Kyle gets his impulsiveness from me. I told her that maybe instead of testing for ADD or control issues we ought to test him for testosterone and natural childlike exuberance, and that I’d bet he’d test positive. I also told her that if this kid were a finished product, she and I would both be out of jobs!”

Poor Joni. Her only satisfaction was that she got in the last word before storming out of Ms. Willett’s classroom. That, and telling her husband that their son had been officially diagnosed as a boy. They are now considering home-schooling. Who can blame them?

Judy Gruen is the mother of four great kids. Her latest award-winning book is  The Women’s Daily Irony Supplement. Read more of her work on www.judygruen.com.

Posted in Linger, Off My Noodle | Tagged boys, growing up, men | 5 Responses

5 responses to “OFF THE NOODLE: Diagnosis: Male”