REEL LIFE WITH JANE: Should the Kids See "The Green Hornet"? 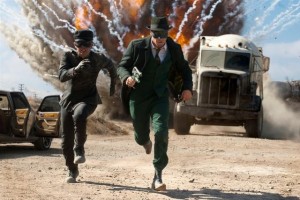 SYNOPSIS: Following the death of his father, Britt Reid teams up with tech-and-ninja savvy Kato to become a masked crime-fighting team. It’s not all smooth sailing, though, and as the wealthy heir to his dad’s publishing empire, Britt has some big shoes to fill.

Sex/Nudity:  Britt is a ladies’ man who hangs out (and sleeps) with provocative and beautiful women. One scene shows him waking up next to a woman whose name he can’t remember. Later, he tries to kiss his assistant, but she pushes him away.

Violence/Gore: There’s not a lot of blood, but plenty of killings and injuries via guns, hand-to-hand fighting, martial arts, crushes and explosions. One scene finds Britt and Kato buried in a car.

Drugs/Alcohol: Britt drinks and parties with his friends and mixes a drink of vodka and Red Bull at one point. References to a drug lab and crystal meth.

Will Parents Like It?  There are plenty of jokes, but most of them seem cheesy and slapped together. Also lots of sex references and violence, which is why I don’t recommend it for kids younger than 14.

REVIEW: I like a good comic book movie as much as the next girl, but it helps if they’re well done. ‘The Dark Knight’ and ‘Spider-Man’ are examples of great comic book/superhero movies, but ‘The Green Hornet’ doesn’t really fall into that category. And yes, I realize it’s supposed to be an anti-superhero movie, in that the main characters have no special powers and are sort of bumbling their way through the perils of crime-fighting.

Oh, all the elements of a great movie are there: interesting characters, seasoned actors, and a story that’s been around since the 1930s. Yet I came out of the theater thinking the best thing about this movie is the car. It IS a really impressive car.

The story begins with Britt Reid (Seth Rogen, who also wrote the screenplay with Evan Goldberg) partying hardy as his father James (Tom Wilkinson) berates him for failing to be a productive member of society. But when James dies suddenly, Britt is left with his dad’s Los Angeles newspaper dynasty.

After firing the household staff, the bratty Britt goes on a rampage to find the servant who used to deliver his unforgettable latte every morning. It turns out to be none other than his dad’s car mechanic, Kato (Jay Chou, stepping into the role that Bruce Lee made famous in the 1960s TV series). Turns out that Kato has hidden engineering and martial arts skills, unveiled one night when he and Britt stop a robbery in progress.

Britt decides that maybe his dad is right. Maybe they should use Britt’s money and Kato’s talent to make the world a better place by stopping crimes in progress, including those surrounding dangerous crime lord Chudnofsky (Christoph Waltz, ‘Inglourious Basterds’). So they set out to do just that, starting with some cool masks, a tricked-out car designed by Kato, and unsuspecting secretary Lenore (Cameron Diaz) who’s also an amateur criminologist.

‘The Green Hornet’ is a mixed bag. I get that they’re trying to make Kato and Britt into an odd-couple bromance, but the two don’t have much chemistry, and most of the jokes fall flat.

It seems like there wasn’t a lot of time devoted to writing this thing, which pains me to say, because I usually like Seth Rogen’s stuff. For the most part, Britt comes off sounding like a kid who’s just gotten hold of some cool toys. Yes, he’s a slacker, but he’s also a grown man.

Likewise, it’s such an odd role for big-movie-star Cameron Diaz. Here, she takes a back seat and, again, has no chemistry with anyone else in the cast. Likewise for most of the other cast members, including James Franco and Tom Wilkinson, neither of whom see much screen time.

Then again, my 16-year-old son and his friend absolutely loved this movie and made me vow to say something nice about it. Okay, here it is: parts of the movie are funny, like the manic chase scene where Britt and Kato end up in an elevator, in the front seat of the car, while the back end of the car gets chopped off and stays on the ground floor.

And the Black Beauty car really IS very cool, with all sorts of artillery and gadgets, including an ejector seat that comes in handy at one point. I also loved the ‘Green Hornet’ theme song (a jazz version of Rimsky-Korsakov’s ‘Flight of the Bumblebee,’ recorded by Al Hirt), but I wish they’d used it throughout the film, rather than just at the end.

In fact, if they’d injected the energy and fun of the last 20 minutes throughout the rest of this movie, I’d have given it a better review. Note that I saw the 2D version, but it was also released in 3D.