LIVING IN SPLITSVILLE: Custody's 5 Days On, 5 Days Off 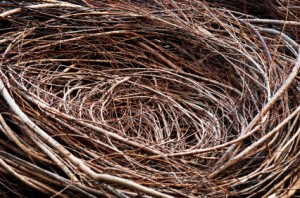 Even two-plus years into it, the 50/50 custody thing is hard to digest. In the beginning, it was necessary and therapeutic, even heady and thrilling to be granted days and days of kid-free time. It was one of the few things that compensated for the overall awfulness of the experience.

Prior to that, whenever R& I unloaded the kids on grandparents or babysitters, we used it for “we” time–to see movies, go out to dinner, or take vacations. A true stint of solitude was a completely foreign concept.

There’s an established rhythm to the custody routine at this point–two days on, two off, five days on, five off–and as time passes, I become more and more estranged from my children’s other life.

When the girls go for their 5-day stretch with R, here is what happens in my world:

Here’s what happens when they return to me after five long days away:

As we get to day four of the stretch, my nerves, reinforced by the days without them, begin their bi-monthly fray, even as it hurts to see them go. My daughters pack their bags, I send them on their way, and the cycle repeats.