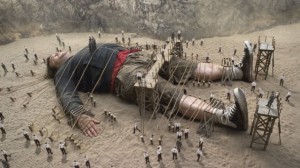 SYNOPSIS:Lemuel Gulliver (Jack Black) is stuck in a dead-end job working in the mail room of a New York newspaper. But when a new hire is promoted over him, Gulliver decides to plagiarize his way into an assignment for the travel editor (Amanda Peet), whom he’s had a serious crush on for five years. The story lands him smack in the Bermuda Triangle and a world of tiny people known as Lilliputians.

Sex/Nudity:Some innuendos involving flirting and romantic relationships. Gulliver refers to women as “babes” and “stone cold foxes,” and encourages Horatio to woo Princess Mary by quoting Prince’s song ‘Kiss.’ When Princess Mary asks her fiancé what he likes about her, he points to her breasts, and she says, “Inappropriate.”

Violence/Gore: Cartoon violence, often involving Lilliput’s skirmishes with a nearby kingdom. Gulliver wades into the water to fight one-on-one with a fleet of ships, which fire at his belly, which then repels the ammunition back at the ships, causing chaos. Gulliver also fights a giant robot who gives him a massive wedgie. A character is crushed when Gulliver falls back on him, but no blood is shown. Characters are imprisoned in a cave, but you never get the feeling they’re in real peril.

Profanity: Insults like “loser,” “stupid,” and “lame-ass” (used as the basis of a joke).

Which Kids Will Like It? Kids aged nine and older who like Jack Black films or fantasy tales.

Will Parents Like It? Probably not. The potty humor and thin plot make this a mediocre film, at best.

REVIEW:I can just picture the development meetings for this film: “Let’s take a beloved children’s story, cast a goofy actor in the lead role, throw in some potty humor, and release it in 3D!” Okay, Jack Black produced the movie, so it would have been more like “Let’s cast myself in the lead role…”

Jack Black has carved out a nice little niche for himself in the film industry, playing the pudgy loser who somehow manages to save the day and maybe even get the girl. In ‘Gulliver’s Travels,’ he plays Lemuel Gulliver, the pudgy loser who works in the mail room at a New York newspaper. His prospects for getting out of the mailroom anytime soon are slim to none.

When a new hire (T.J. Miller) is suddenly promoted as his boss, Gulliver realizes he needs to make a change. So he plagiarizes his way into an assignment for Darcy Silverman (Amanda Peet), the cute travel editor he’s had a crush on for five years but can’t bring himself to ask out (even though she seems willing and even hints at the idea).

The fluff piece involves Gulliver traveling to the Bermuda Triangle – alone in a boat with less-than-zero boating skills – where he’s swept into a column of swirling water and deposited on the shores of Lilliput, a kingdom full of tiny people, including Princess Mary (Emily Blunt), the dull General Edward who’s courting her (Chris O’Dowd), and the imprisoned nobody who loves her from afar (Jason Segel).

Thus sets the stage for “there are no small people, only small minds,” which Gulliver finally realizes during his many adventures. It’s a good message for kids: don’t get sucked into stagnant thinking. Dream big and reach for those dreams.

The humor in ‘Gulliver’s Travel’s is classic Jack Black, so if you’re not a fan, you probably won’t like this movie. There are assorted uses of the word “awesome,” a few musical moments, and heart-to-heart talks with people who need some common sense drummed into them. A mildly funny scene finds Gulliver instructing the Lilliputians to create a giant media room and re-make famous movies like ‘Avatar’ and ‘Titanic’ – only with Gulliver in the leading role.

There’s also plenty of potty humor throughout the movie, so look for scenes involving wedgies, butt-cracks, and massive amounts of urine. That one was particularly gross.

I’ve always liked Jack Black, but consider 2003’s ‘The School of Rock’ the high point of his career, with 2008’s ‘Kung Fu Panda’ a close second. I get the feeling that ‘Gulliver’s Travels’ was engineered to keep him in our minds until ‘Kung Fu Panda 2’ comes out next spring.

The problem with ‘Gulliver’s Travels’ is that 1) it relies too much on Jack Black’s humor; and 2) it doesn’t rely enough on Jack Black’s humor. It’s a no-win situation. They don’t even include the big line from the trailer where he swings around and tells Darcy, “We’ll see you in three weeks with a story that’s gonna blow your mind!” And I knew everyone in the audience was waiting for it.

‘Gulliver’s Travels’ is available in 2D (which I saw) and 3D formats. I don’t see how the 3D version could have improved the subject matter.

Could Jack Black have run his course as Jack Black? I guess we’ll find out in the coming year with ‘Kung Fu Panda 2,’ ‘Bernie’ (Richard Linklater’s comedy about a mortician who kills a wealthy widow), and ‘The Big Year’ (David Frankel’s film about three bird watchers hoping to spot the rarest bird in North America).

In the meantime, maybe someone will craft a romantic comedy where Emily Blunt plays a princess who’s loved afar by Jason Segel. If there’s any chemistry in this movie, it’s between those two. Maybe Jack Black could focus on ‘School of Rock 2.’ Or not.

Jane Boursaw is a family entertainment writer specializing in movies, TV and celebrities. Visit her at Film Gecko and Reel Life With Jane; follow her on Twitter; become a friend on Facebook; email jboursaw@charter.net; syndicate her family movie and TV reviews in your publication.

One response to “REEL LIFE WITH JANE: "Gulliver's Travels" Review”