OFF MY NOODLE: Clutched by Handbag Fever 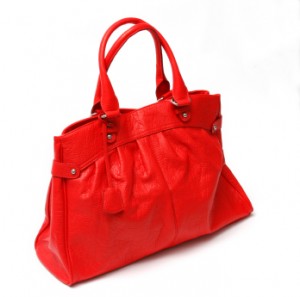 Unless you have been orbiting in a NASA space shuttle and thus shielded from earthly fashion trends, you know that designer purses are the absolute bon ton. I didn’t care, until I caught my fifth-grade daughter pronouncing “Louis Vuitton” with a perfect Parisian accent. That’s when I knew things had gotten out of hand(bag).

As part of my fashion education, my daughter insisted we go to the mall. I admired a smart black Burberry but could not touch it, as it was locked securely behind a glass case. “This purse costs $650.00 – and it’s on clearance!” I sputtered. Living in a retail world anchored by Sears on one side and Target on the other, I was in a state of shock.

My daughter rolled her eyes, “What did you expect? Come ‘on!” She pulled my hand and we stepped into the hushed reverence of a Louis Vuitton store. I wondered where all the merchandise was, since I only saw some museum collection on the wall. Then I realized that these rarified pieces of baby blue suede goatskin and ostrich leather were the merchandise. The rest of the naked store was meant to intimidate, with its presumption that only the great unwashed of humanity shopped in stores with actual merchandise splayed hither and yon.

Quicker than you could say “Attention K-Mart Shoppers!” the elegant salesladies sized me up as an interloper. “May I help you?” asked one in a suspicious tone. Suddenly I felt indignant. How dare she presume that I would not plunk down a month’s worth of grocery money on a purse! Of course, her first clue might have been the cheap pen marks on my own handbag. You simply don’t allow these things to happen to purses crafted from crocodile leather.

I politely asked to see a handbag enthroned on a gleaming glass shelf.

Seeing my shock, she continued, “Look, these purses are hand-made in Europe. Besides, we have others selling for more than $7,000 and there’s a waiting list for them. Not ten minutes ago Nicole Kidman left the store with the last one I had in stock. Now that Nicole’s got one, the waiting list will become months long.”

This was not the first time that Ms. Kidman had beaten me to the punch with a fashion statement, and frankly I was getting tired of it. “I’ll just add my name to the waiting list . . . uh, next time I’m here,” I said. The saleslady let out an audible sigh of relief as my daughter and I skedaddled.

We then pretended to have a serious interest in Farragamo “hobo” bags that cost $600.00. When is that last time you saw a hobo toting around a $600.00 purse? Sure, they were gorgeous, but I didn’t really need a purse that required a Lloyds’ of London insurance policy.

Unfortunately, once I had been introduced to the world of private-label purses, clutches, satchels and wallets, I developed a case of purse-envy. I could buy a suave satchel, if I really wanted to, but it would force me to nip into my offshore account in the Cayman Islands, which I had not been planning to do.

Resetting my fashion hopes infinitely lower, I toyed with the idea of popping for a chic tote in the mere three-figure category, but stopped when I realized that even a $250.00 bag, which was scraping the bottom of the barrel in these things, really would end up costing much more. A signature purse would require a signature wardrobe. Otherwise, it would just look sloppy. Updating my wardrobe would take at least $5,000.00. And how could I drive around town in an old minivan with such a glamour purse? By golly, I’d need a matching Range Rover to make a smashing ensemble, and that would set me back another $90,000.00, not including taxes and dealer prep charges. I’d have to ditch all my cheap pens so they wouldn’t bleed over the fine satin inside my purse. A good pen could cost $40.00, if not more. I realized that accessorizing my purse would cost me more than $95,0000, and frankly, I could buy 4,612 of my regular cheap purses for that kind of dough, and I can’t imagine needing any more than 1,500 throughout my lifetime, even if I live to 100.

The next day, I was delivered from purse lunacy by a catalog that came in the mail. There I found a fine tapestry bag with a roomy interior, costing only a fraction of a Coach. Okay, so the lining was polyester, not satin, but the straps were real leather. Best of all, this bag didn’t have a waiting list, and I’m pretty sure I’ll have mine before Nicole Kidman gets hers.

This column appears in Judy Gruen’s book, The Women’s Daily Irony Supplement. And if you liked this column, you’ll love the book! By the way, Judy continues to spend more on groceries than on purses – way, way, way more. Write to her at judy@judygruen.com.

Posted in Linger, Off My Noodle | Tagged parenting, shopping, teens | Leave a response