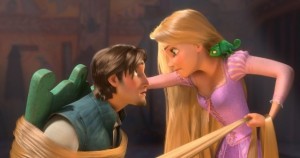 SYNOPSIS: The golden-haired Princess Rapunzel has spent her entire life locked in a tower, thanks to Mother Gothel, the woman who stole her as a baby and uses the girl’s magical tresses to keep herself young. But when a passing bandit seeks refuge in the tower, Rapunzel suddenly finds herself in the outside world – and loving it.

Sex/Nudity: Characters flirt and eventually hold hands and kiss. An older woman uses magic to make herself look young and entice men to do her bidding.

Violence/Gore. Mother Gothel is creepy and only pretends to be nice to Rapunzel to keep her locked in the tower. Cartoon violence includes people being chased, evading arrows and fires, and caught in rising water. The king’s soldiers are menacing. A main character appears to have been killed with a knife. Another falls to her death, but vanishes before hitting the ground. There’s also an ongoing bit about people being hit over the head with a frying pan.

Drugs/Alcohol: Tough-looking characters drink in a restaurant. One slurs his speech and acts drunk.

Which Kids Will Like It? Kids 5 and older who like animated fairy tales with fun characters and a modern-day twist.

Will Parents Like It?  Yes, it’s a sweet movie that’s fun, musical and offers some great lessons about girl power and making dreams come true.

REVIEW: It’s not often that I see a kids’ movie and want to immediately see it again, but that’s the case with Walt Disney Pictures’ ‘Tangled,’ a re-imagining of the classic Rapunzel fairy tale that puts girl power front and center.

Mandy Moore voices the princess with the long, golden tresses, and she really has a great voice for animated stories – joyful and happy one minute and sad and heartbroken the next. We learn that Rapunzel is about to turn 18, but has been locked in a tower her entire life by Mother Gothel, a woman who stole the girl as a baby from the King and Queen. Turns out that Rapunzel’s long hair has magical powers. When she sings, the hair glows and has the ability to heal wounds or, in Mother’s case, keep her young and pretty.

The tower isn’t a dark and depressing place. In fact, Rapunzel has been painting wonderful things on the walls for years, and she doesn’t seem to be hurting for anything. Since this is the only mother she’s ever known, I guess Rapunzel doesn’t realize that the woman isn’t as loving as she could be and is only using the girl for her hair.

Here’s where Flynn (voiced by Zachary Levi of ‘Chuck’) comes in. He’s a rogue bandit with his own identity issues who seeks refuge in the tower. Rapunzel promptly conks him over the head with a frying pan and keeps him trapped in her hair until he promises to take her to see the floating lights that always appear in the sky on her birthday. In exchange, Rapunzel will return the jeweled crown she found in Flynn’s pack.

Once in the outside world, Rapunzel realizes what she’s been missing all these years. She’s torn between wanting to remain free and feeling obligated to obey Mother’s wishes and remain “protected” in the tower. The girl is strong, resourceful, and beautiful, and she and Flynn have great chemistry that grows with their outside adventures. And in a refreshing change of pace, it’s he who nearly dies and must be saved by her.

‘Tangled’ is also a musical, but the songs are blended well into the action, so you don’t have that feeling of wanting a song to be over so the movie can continue on. Alan Menken’s great soundtrack includes Moore’s optimistic ‘When Will My Life Begin,’ Murphy’s ‘Mother Knows Best’ (she has a great Broadway voice), the lovely ‘I See the Light’ and inspiring ‘I’ve Got a Dream,’ along with singer-songwriter Grace Potter’s theme, ‘Something I Want.’

The movie is available in 2D and 3D; I saw the 3D version, and some scenes definitely benefit from 3D technology, including the lovely “floating lights” scene. Really gorgeous.

I love that the Disney princess genre hasn’t gone out of style. Last year brought us ‘The Princess and the Frog’ (which I loved), and this year is ‘Tangled,’ a movie that has everything – fun characters, great voices, gripping action, lovely songs, and a heartfelt message about following your dreams and becoming the person you were always meant to be.

Jane Boursaw is a family entertainment writer specializing in movies, TV and celebrities. Visit her at Film Gecko and Reel Life With Jane; follow her on Twitter; become a friend on Facebook; email jboursaw@charter.net. Learn how to syndicate her family movie and TV reviews in your publication.