LIVING IN SPLITSVILLE: Inside Pandora's Desk, a Dead Marriage 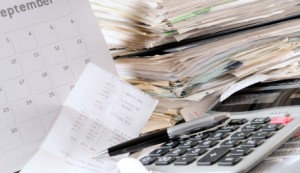 I’ve been hating the desk in my dining room for months now. We moved it down there after R moved out and tenants occupied the third floor of our house, where I previously had a little office. It’s a big, clunky piece of furniture whose main virtue is that it holds a lot of stuff. But I never use it anymore. I’ve spent months plotting to get rid of it and to replace it with something sleeker and more dining room-like and finally, this past weekend, I made it happen. Prior to ditching the desk, though, I had to empty its seven drawers, an experience that turned out to be something of an emotional landmine. A few of the random, meaningful, meaningless things I came upon:

It’s clear what I should do with the hospital bracelet (stick in box with other baby memorabilia) and the invitations (toss into recycling), and the mini-cassette recorder (save because no other way to play mini cassette tapes of girls saying ridiculously cute things at age 2). But what about the R-related (but not necessarily R-rated) stuff?

These random desk-drawer findings are just the tip of that iceberg. There’s a box in my closet that contains assorted pieces of my past, from my junior high school diary to another stack of love letters from R. (I threw this particular pile of them at him during the ghastly, wrenching pre-separation months and also offered some suggestions for where he might want to shove them.) And then there’s an entire freestanding wardrobe filled with photo albums chronicling our 18 years together.

It’s been a couple of years since R left now and I have some distance. I have transferred my romantic feelings to another person. I can come across the odd Valentine’s Day card from R without it sending me reeling. But still. Still. I shared almost half of my life with this person and it’s hard to know where to put it all, literally and figuratively.

Reading these gushy missives is an out-of-body experience. I know all of that happened and that this was the most significant and lengthiest relationship of my life, but it all seems so, so distant already. It’s still hard to process how those passionate written exchanges, once focused on our mutual adoration, could have devolved in to the quick, terse, business-like email affairs that they are today. Looking at letters and photos from my married days brings up something different than the sweet nostalgia I feel when I read something saved from a college or high school boyfriend. Those relationships were meant to be finite. The scenes from a marriage, on the other hand, still sting and feel like reminders of failure–as if they don’t really count because it didn’t last.

So where do I store this stuff emotionally, how do I make a place for it in the modular add-on system of past experiences growing inside my aging brain? Do I want my kids to come across those letters one day so they can see that in fact their parents loved each other once? (Does one keep naked pictures of one’s ex? What’s the protocol there?) Or should I get rid of all of it, sending it off with the ship that has sailed?

While I was unloading stuff from the desk drawers to the dining table, a little gift card fell open. It was signed  ”I love you, R,” and it landed right on top of a folder labeled “Separation Agreement.” Really. You can’t make this stuff up, and I didn’t.

3 responses to “LIVING IN SPLITSVILLE: Inside Pandora's Desk, a Dead Marriage”