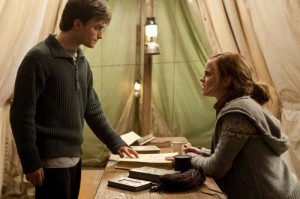 SYNOPSIS: As Harry, Hermione and Ron search for the Horcruxes to defeat Voldemort, they uncover the existence of three powerful objects in the wizarding world – the Deathly Hallows. But the Dark Lord’s power continues to grow as he gains control over Hogwarts and the Ministry of Magic.

Sex/Nudity:Harry and Ginny kiss after she asks him to zip up her dress (her bare back is exposed). Ron and Hermione flirt and embrace, and at times, she expresses disapproval with his behavior. While under the power of a Horcrux, Ron sees a vision of Harry and Hermione kissing passionately while appearing nearly nude. It’s blurry, though, so viewers don’t see much.

Violence/Gore. This is the darkest Harry Potter movie to date, and violence is woven throughout the story. At the Ministry of Magic, Muggle-borns are put on trial and whisked away, and torture is implied. A beloved character dies after suffering a knife wound, and Harry, Ron and Hermione must bury him. Harry nearly drowns in an iced-over pool of water, Hermione is tortured as Ron and Harry listen helplessly, and Ron suffers a mangled shoulder. A character loses an ear during an airborne Death Eater chase, and blood is shown. A venomous snake emerges from a dead body and pursues a main character. Dementors, Death Eaters, and Snatchers put main characters in danger. Battles include fist-fights, wand-fights and characters being knocked around.

Profanity:“Damn,” “hell,” “piss,” and “oh my God,” as well as British slang like “bleeding” and “bloody.” Insults like ‘blood traitor” and “Mudblood” (racist terms in the wizarding world).

Drugs/Alcohol: At a wedding reception, champagne glasses are magically filled.

Which Kids Will Like It? Kids 13 and older who like ‘Harry Potter’ or fantasy movies, or who’ve read the books by J.K. Rowling.

Will Parents Like It?  Another great installment in the ‘Harry Potter’ franchise, but because of the dark storyline, I don’t recommend it for kids younger than 13.

REVIEW: ‘Harry Potter and the Deathly Hallows: Part 1’ isn’t my favorite movie in the series so far, but that has more to do with the storyline than the production.

This is yet another fine movie in the franchise, but the dark and sad story has me yearning for Part 2, which my mom — the Harry Potter expert — assures me is brighter and cheerier. Unfortunately, that won’t hit theaters until July 15, 2011, so the sadness of this one will linger until then.

‘Harry Potter and the Half-Blood Prince’ ended with Professor Dumbledore dying, and this one picks up with the reading of his will and bequests to the teens – a golden snitch for Harry Potter (Daniel Radcliffe), a children’s book for Hermione Granger (Emma Watson), and a mysterious light-catcher for Ron Weasley (Rupert Grint). Armed with these objects, the trio sets off on a dangerous mission to search for five missing Horcruxes – fragments of Voldemort’s soul that will help to bring down the Dark Lord.

Living in a tent on their cross-country journey, the three friends deal with the threat of Death Eaters, Dementors and Snatchers — a group of bounty hunters formed by Voldemort to round up Muggle-borns and “blood traitors.” At times, they also experience danger from the Dark Lord’s supporters, including the Malfoy family and Bellatrix LeStrange (Helena Bonham Carter, with her creepy mane of tangled hair and dark clothes).

But the teens are also dealing with interpersonal struggles and jealousy, made even more complicated by the one Horcrux they possess. Not unlike The One Ring in the ‘Lord of the Rings’ trilogy, the Horcrux casts a burdensome spell over whomever is wearing it around their neck.

I’ve talked to a few people who’ve said this movie swings wildly between high-energy scenes and slower, dramatic scenes. I realize that movies based on books rarely ever follow the original story to the letter, but this is the story that director David Yates had to work with, and there are only so many liberties you can take.

At the beginning, we have the perilous scene where Harry’s friends masquerading as him are pursued by Death Eaters. Later, the story shifts to focus more on Harry, Hermione and Ron traveling across the country, living in a tent, and being sad about the current state of the world. But intermixed are several jump-out-of-your-seat scenes. My friend sitting next to me actually yelped a few times.

I love that ‘Deathly Hallows’ was made into two movies, because it allows the story to unfold at a somewhat leisurely pace, rather than trying to cram everything into a couple of hours. Let’s face it – we expect a lot from these final movies, so let’s string things out a bit to help ease the grief of the series ending.

While some beloved characters don’t see much screen time in this movie, there are some fine performances, including Toby Jones (the voice of selfless house elf Dobby), Evanna Lynch (Luna Lovegood) and Bill Nighy (Minister of Magic Rufus Scrimegour).

And let’s not forget the emotional, nuanced performances by Radcliffe, Watson and Grint, who continue to be the heart of this story. I was at turns sad, joyful, terrified and proud of these kids for the sacrifices they’ve made to ensure the safety of the wizarding world.

In some ways, I’d like to jump ahead to next July and find out how it all ends (yes, I really don’t know, because I haven’t finished the final book yet). On the other hand, I’m happy to wait and savor each moment while it lasts.

One Reel – Even the Force can’t save it.
Two Reels – Coulda been a contender
Three Reels – Something to talk about.
Four Reels – You want the truth? Great flick!
Five Reels – Wow! The stuff dreams are made of.