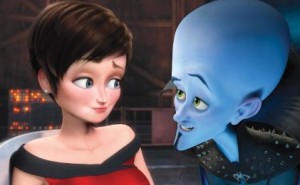 SYNOPSIS:When supervillain Megamind finally conquers his goody-two-shoes nemesis Metro Man, he finds his life pointless without a hero to fight. But maybe his love for news reporter Roxanne Ritchi will take him in a new direction.

Sex/Nudity: Some flirting, including hugging, hand-holding and one kiss. A male character calls a female character “temptress.” Also, Roxanne’s outfits are darn tight and provocative for a cartoon character.

Violence/Gore: Explosions and aerial battles, although it’s all very cartoonish and non-scary. It appears that a character has died, and a skeleton is shown. A female character is threatened, but she’s not scared and dishes it right back. Another scene finds her falling from the sky, but you never feel like she’s in real danger.

Will Parents Like It?  It’s a cute movie for kids, but grownups will likely forget about it soon after leaving the theater.

REVIEW: It’s never good when you forget about a movie shortly after seeing it. And just because it’s billed as a family movie doesn’t mean it gets a pass. I remember every scene from ‘The Incredibles’ and ‘Finding Nemo’ – and those weren’t in 3D. Readers of Reel Life With Jane and Film Gecko know I’m not big on 3D movies, and ‘Megamind’ does nothing to change that.

It’s a sad state of affairs when a voice cast that includes Will Ferrell, Brad Pitt, Tina Fey, Jonah Hill, David Cross and Ben Stiller results in a completely forgettable movie. It also makes me wonder if part of the movie’s anti-luster is precisely because of the impressive voice cast.

For one thing, these actors are known for using physical comedy in their roles, even if it’s just a look or wink. They don’t get to do that in an animated movie, and probably don’t get the benefit of working with another actor in the studio, since many animated roles are recorded solo. One of the reasons ‘Monsters, Inc.’ was such a great movie is because Billy Crystal and John Goodman recorded their voices together, and thus were able to improvise and riff off each other in the studio.

I also wonder if the filmmakers pegged a lot of the success of ‘Megamind’ on the actors themselves, and maybe put less time and effort into the script and storyline. It’s not a bad story, just unremarkable.

The story begins with baby Megamind (voiced by Ferrell) being sent to Earth by his parents just before his planet gets sucked into a vortex. That same day, Metro Man (Pitt) is also sent to Earth, where he lands under a rich couple’s Christmas tree and grows into a beloved superhero. Meanwhile, Megamind lands in a prison, where he’s raised by convicts and grows into a vengeful supervillain.

The years go by, and on the day that Metro Man is honored with a giant statue and museum by the people of Metro City, Megamind breaks out of jail. With the help of his alien minion (Cross), he kidnaps popular news reporter Roxanne Ritchi (Fey) and succeeds in killing off Metro Man.

But without a hero to fight, Megamind grows bored and restless and decides to create a new superhero he can battle. Unfortunately, the new hero Titan (Hill) has no intention of using his powers for good. He puts Roxanne in danger, which causes Megamind to re-think his priorities.

There’s no doubt that all of these actors are gifted entertainers, and Ferrell has fun mispronouncing words like “MeTROcity” and “meLANcholy.” Pitt and Fey basically voice themselves – a superhero who mesmerizes people with his good looks and a fearless female who can dish it out as well as take it – and Hill and Cross voice their characters admirably. But despite the star-studded cast, the story is a bit slow, especially after Metro Man is killed off.

The music is fun, including AC/DC’s ‘Highway to Hell’ (the “hell” is cut off just in time!) and ‘Back in Black,’ as well as Guns N’ Roses’ ‘Welcome to the Jungle.’ But it’s not like we haven’t heard all of these tunes in previous movies. Pick something original, people.

I love doing “Theater Tweets,” sending thoughts to Twitter as I’m watching movies. About 20 minutes into ‘Megamind,’ I tweeted “This is supposed to be a comedy, right? No one is laughing.” And that pretty much sums up the movie. It’s cute, but unremarkable and probably not something kids and parents will want to watch over and over again.