REEL LIFE WITH JANE: Should You Take the Kids to See "Secretariat"? 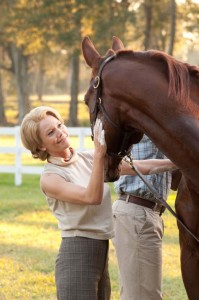 SYNOPSIS: Diane Lane plays housewife Penny Chenery, who agrees to take over her ailing father’s Virginia-based Meadow Stables, despite the fact that she knows little about horse-racing. With the help of veteran trainer Lucien Laurin (John Malkovich), she navigates the male-dominated business and ends up with the first Triple Crown winner in 25 years.

Sex/Nudity: Not an issue.

Violence/Gore: Some of the race scenes are pretty intense, because they’re shown intermittently from the perspective of the jockey. Penny is the target of sexist remarks by a rival horse owner, who calls her “little lady” and mocks her racing knowledge.

Drugs/Alcohol: Some social drinking at a pre-race ball.

Will Parents Like It?  It’s classic uplifting Disney, and a great production, as well.

REVIEW: When I first heard about ‘Secretariat,’ I wasn’t expecting much. Haven’t we seen this story a million times before? Wouldn’t it just be 2003’s ‘Seabiscuit,’ only with different names and faces in a different era?

That’s what I get for jumping to conclusions. I’m happy to say that not only was I pleasantly surprised, but I practically jumped to my feet in the theater during several scenes. And while Diane Lane didn’t seem all that compelling in the trailer, she really brought home the character of Penny Chenery, the real-life woman who nurtured Secretariat to the first Triple Crown victory in 25 years.

Lane’s portrayal of the 1960s housewife who knew nothing about racing, along with scene stealers John Malkovich, Margo Martindale and Nelsan Ellis (Lafayette on HBO’s ‘True Blood’) make this movie a winner.

And, of course, the story of Secretariat is truly inspiring. I was a kid when the famed horse made headlines in the 1970s, but I never really knew the full story. Penny Chenery Tweedy was a housewife and mother of four when her mother passed away and her father’s health started to fail, leaving his Virginia horse farm, Meadow Stables, in dire straits.

Though she lived in a different part of the country, Penny felt compelled to take over the farm rather than sell it. So she began studying the fine art of horseracing and breeding, and stood her ground against the “good old boys’” network. She fired the farm’s trainer, who was working questionable deals on the side, and hired a veteran trainer with an interesting fashion sense named Lucien Laurin, played by John Malkovich.

Malkovich has this ability to just “be” whatever character he’s called upon to play, and he does that here with free-spirited abandon. He wears wild-colored jackets and plaid hats, but his “gruff guy with a heart of gold” character is what endures him to movie audiences. ‘Secretariat’ also brings him to a whole new theater crowd, since many of his previous roles have been geared for adult audiences.

Other great performances include Margo Martindale as Miss Ham, the housekeeper at Meadow Lanes who has Penny’s back all the way; Nelsan Ellis as the stable guy who looks after Secretariat; and Nestor Serrano as Pancho Martin, the scrappy jockey who rides Secretariat to victory. Some of the dialogue is a little cheesy, but it’s hard not to love this true story, based on the book ‘Secretariat: The Making of a Champion’ by William Nack.

The horse who plays Secretariat, a.k.a. Big Red, is gorgeous and powerful. It almost seems like you’re watching the real deal, as he pounds down the racetrack, comes from behind to bring home the trophies, and poses for the cameras. Many of the racing scenes are shown from the perspective of the jockey, which puts viewers right in the heart of the story.

‘Secretariat’ is a classic Disney movie that’s also an excellent family film for kids aged 7 and older. Penny Chenery is a great role model for young girls, and the story is uplifting and inspiring, even down to Penny’s oldest daughter, who takes a stand in the flower-power crowd of that era. And if you were around in the 1960s, you’ll love seeing the furniture, clothing and other vintage elements.