REEL LIFE WITH JANE: Should You See "The Social Network"? 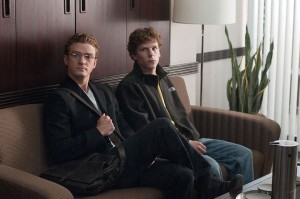 SYNOPSIS:When undergrad Mark Zuckerberg created a computer program to connect people at Harvard University, little did he know that it would launch a new era of social networking and connect millions of people around the world. Unfortunately, that program, known as Facebook, also spawned several lawsuits and cost Zuckerberg his one and only friend.

Sex/Nudity: Since sex and dating are some of the main reasons Zuckerberg started Facebook, sexual themes are interwoven throughout the movie. Scenes include girls who appear to be performing oral sex on guys in bathroom stalls (nothing graphic, but it’s implied); a couple wakes up in the same bed after sleeping together the night before (the woman is wearing panties and a cut-off top); guys and girls play strip poker; scantily-clad women make out (with each other and with guys) and dance around; girls are pitted against each other in Facemash, an online ratings site for “hotness.”

Violence/Gore. Two guys nearly get into a fight until their friends stop them. A character violently throws a laptop on the floor, and security escorts him from the building.

Drugs/Alcohol: College students drink in their dorm rooms and at frat parties and nightclubs. One scene shows students doing lines of a drug, likely cocaine, at a party; the cops show up and haul several kids off to jail.

Which Kids Will Like It? Kids 14 and older who are into Facebook and social media; fans of Jesse Eisenberg or Justin Timberlake.

Will Parents Like It?  It’s a very entertaining movie, with top-notch acting and a great production. ‘The Social Network’ will likely be remembered as one of the better films of 2010, but because of the content, I don’t recommend it for kids younger than 14.

REVIEW: While watching ‘The Social Network,’ I tweeted about whether I wanted to be Mark Zuckerberg or not (yes, on Twitter, but my posts are automatically sent to Facebook, so the conversation ended up there, too). A bunch of people jumped in with an emphatic “No!,” and one friend suggested that sharing his bank account might be a good compromise. I could live with that.

But as for being Zuckerberg … I don’t think so. I’m not one to jump to conclusions or pass judgment on people I don’t know, so I won’t go there. I’ll just say that I wouldn’t want to alienate people and be the target of multiple lawsuits for any amount of money. But isn’t it fascinating that the guy who created Facebook has so many enemies? That just seems unreal to me.

On the other hand, who doesn’t want the nerdy geek to come out ahead in the end? Even if you don’t like Zuckerberg for whatever reason, you’ve gotta hand it to a guy who can stand his ground. Did he steal the idea from the Winklevoss brothers? Who knows? It certainly seems plausible that everyone sort of came up with a similar idea all at the same time. Zuckerberg himself has said the film is fiction, so there’s that.

At any rate, the movie begins with Zuckerberg (Jesse Eisenberg), a Harvard undergrad, on a date with a girl named Erica (Rooney Mara; Kate Mara’s younger sister, in case you’re wondering). Having no social skills whatsoever, Zuckerberg speed-talks through an interrogation of Erica, which doesn’t sit well with her. She angrily ends the date, at which point he goes back to his dorm room, writes a scathing blog post about her (and her breast size), and begins creating a “hot or not” computer program known as Facemash. You could say that was the beginning of Facebook.

If we’re to believe the film, it took Zuckerberg a matter of minutes to hack into all the Harvard sorority Web sites and download all the girls’ photos to use with the “hot or not” program. Word travels fast. Everyone and their brother is soon playing the “hot or not” game. The girls are miffed, and Zuckerberg gets in trouble with the Harvard head honchos. But his hacking skills also attract the attention of twins Cameron and Tyler Winklevoss (both played by Armie Hammer), rich kids who enlist Zuckerberg to help build their “Harvard Connection” program.

Zuckerberg agrees and starts to write the program, but he’s soon dodging their phone calls and before you know it, Facebook goes live with Zuckerberg as CEO and his roommate and only friend Eduardo Saverin (Andrew Garfield) as CFO. The Winklevoss twins are not impressed, and they end up suing Zuckerberg for idea theft.

Facebook expands to other colleges, and Zuckerberg partners up with Sean Parker (Justin Timberlake), the founder of two legendary Web sites, Napster and Plaxo. Along the way, Eduardo gets shoved aside. Now he’s also suing Zuckerberg.

You can see where I’m coming from in not wanting to be Zuckerberg. The guy now has no true friends (although at this writing, nearly 900,000 people “like” his Facebook page) and more lawsuits than you can shake a stick at. Interestingly, he’s only posted a dozen or so status updates between December 2009 and September 2010. The most recent involve his charitable efforts, including an appearance on The Oprah Winfrey Show to promote his new Startup: Education Foundation.

Zuckerberg’s personal life aside, ‘The Social Network’ is a very entertaining film. With David Fincher directing and Aaron Sorkin writing (the film is based on the book ‘The Accidental Billionaires’ by Ben Mezrich), it’s also a very well done film, with beautiful camera angles and believable characters played by skilled actors. With his gawkiness and droney voiceovers – which, okay, get a little annoying after a while — Jesse Eisenberg seems like the perfect guy to play Zuckerberg.

Even if you’re not on Facebook and know nothing about it, this film is worth seeing for all those reasons. You have to wonder, though, if the film would have been as popular had it been made a year or two ago. Most people now have at least a passing connection to Facebook, which makes its origins all the more intriguing.