LIVING IN SPLITSVILLE: I Need a Chair, Dammit! 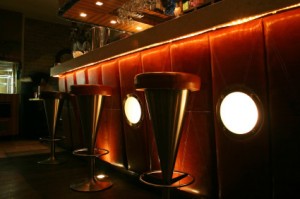 This week, I lived another midlife cliche–that of the aging hipster who doesn’t realize just how aged she is until she revisits the kind of scene that in her younger days passed for fun times and she just doesn’t get it anymore.

I was at a night club (is that what they call them these days?) called the Mercury Lounge, where I went to see the band Urge Overkill. The guitarist/singer, Nash Kato, is a friend of mine from college and a very talented dude (not that I can use the word dude without sounding like an idiot, but that’s sort of the point here). I wanted to be supportive, but found that I needed to be supportED– as in, physically.

It was a rainy Monday night at 10:30 pm–a time when I am usually asleep or catching up on “Mad Men”–and I was standing shoulder-to-shoulder with a bunch of equally middle-aged UO fans–most of them male, portly, and balding– in a hot, dark room, waiting for the band to take the stage.

After about five minutes of this insanity, I realized that I can no longer stand like I used to, especially while simultaneously clutching my raincoat, an umbrella and a plastic cup of mediocre white wine. I’m 47 and I need a chair, dammit! And a little table on which to place my vino. And a piece of fine stemware instead of a plastic cup.

The longer we stood there, the more outraged I became. How could anyone expect a mob of moist, aging hipsters to stand and stand and stand right next to each other like this? I kept looking around, thinking there has to be a chair somewhere. Someone must be getting the chairs right now–at least one of those folding soccer-mom chairs with the cup holder in the arm. Right?

Wrong. No chairs; not even a stool. But the standing became the least of it once the band started playing. UO has a lot of energy. They are very, very loud. The kind of loud where emergency ear plugs fashioned from a ripped-up Kleenex do no good because the whole room is throbbing and it’s not about your hearing as much as your entire circulatory system.

I flashed back to my college days, when a Saturday night required this kind of loudness and chaos and endless standing in order to qualify as fun. In fact, I recalled seeing the band Black Flag with Nash and finding the whole slam-dancing thing slightly barbaric. At my age, I guess standing is the new slam-dancing.

I also started to worry about the band members, who were all sweaty and red-faced. I was concerned that one of them might have a stroke. Then, after the show, I couldn’t stop telling my pal K (Nash’s girlfriend) how he’s such a great performer with a wonderful voice and that it’s a shame we couldn’t hear him because of all the noise, not to mention the standing. I told her to suggest that he reinvent himself as a soothing folk-singer type. He could play in quiet, classy little venues with tables and chairs and decent wine. Nothing wrong with that, is there?