OFF MY NOODLE: Putting the Squeeze on Shoe Shopping 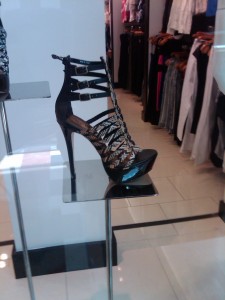 The news hit me as painfully as the stiletto heel that accidentally ground into my foot when I danced the hora at a recent wedding: Our favorite shoe emporium, roughly the size of the Pentagon, had closed, suddenly and without any warning. I ran to break the news to my 16-year-old daughter. We stopped to bow our heads in a moment of silence, and I was not too proud to shed a tear. My batch of 10-dollar off coupons for the store were now just forlorn bits of paper utterly without purpose – unless you count recycling.

You might assume that I love shoe shopping, given this level of disappointment over the untimely passing of a shoe store. But I don’t — at least not when I’m with my daughter. There is trouble afoot when we shop for shoes as a team. In fact, the activity is fraught with emotional complications worthy of an episode on Dr. Phil’s show, or, on a bad day, Judge Judy. While we enjoy an enviably simpatico relationship in nearly every other area, we have radically different tolerance levels for the duration of any single shoe shopping excursion.

For example, once we step into any shoe store the size of a football field or larger, I feel bombarded by the profusion of pumps and peep toes, surfeit of sling-backs, and bounty of ballet flats and boots. I am also terrified by some styles: whose idea was it to put menacing spikes on sandals? Are those things really pit bull collars, destined for Petco but sadly misdelivered? This visual assault of shoes makes me so dizzy that all I want to do sometimes is lie down and take a nap. Barefoot.

While I am working to ward off sensory overload, though, my daughter is just getting warmed up. She coolly surveys the landscape, assessing the quality of the leather and fabric prints, and plots her strategy. Part of that strategy involves thwarting my every effort to help her find a pair of shoes that she will not dismiss as ugly, old lady-ish, or gross.

The odds that she will find even a single pair of shoes to her liking among the thousands on display are slim enough, but disapproval of any pair is absolutely guaranteed if I, her mother, am insane enough to suggest a particular style. Because she has good manners, she will often accept the proffered pair and say, “I”ll try them,” but it’s a lifeless response. She really wants me to just go back to the aisle I came from, where the other “sensible shoes” are waiting for other style-challenged patrons like me.

But a mother can only take so much rejection. After nixing three or four pair of shoes that I hoped and prayed from the bottom of my heart might pass her litmus test for coolness, I get that adrenalin rush that indicates a fight-or-flight response. I can feel my synapses misfiring, the enamel falling off my teeth, the entire aging process revving up to warp speed. And I have waited in those stores, sometimes for days, while my otherwise very lovable daughter will deign to purchase a single pair. Then I surrender my credit card, along with any remaining working synapses, barely getting out alive.

Worse, despite my heroic and selfless efforts, she has accused me of suggesting shoes for her – a young, trend-conscious person – that I actually want for myself. “That’s not true!” I protest in self-defense. Unfortunately, my claim has been undermined repeatedly when I end up buying the very pairs of shoes that I originally had suggested for her and that she summarily rejected.

“You see? I told you that you wanted them for yourself,” she said when I sheepishly toted home two new pair of shoes: a cute everyday flat, and a low-heeled semi-dressy black-buckled number. “Just because you didn’t want them, why should the world be deprived of their simple beauty?” I huffed.

Last week, I thought I finally smelled victory when my daughter and I left Macy’s, each with one pair of shoes. But under the harsh light of reconsideration at home, she deemed the very same shoes that she had liked in the store a style error, and we returned them two days later.

To preserve our relationship, we have agreed to part ways in the matter of shoe shopping. I have even buckled under and am allowing her to get her driver’s license earlier than initially promised, because I am desperate to escape from the trauma of tandem shoe shopping. We will continue to shop together for clothes, which is less partisan, as well as frozen yogurt. And if you’re looking for my daughter anytime soon, if she’s not studying her driver’s ed curriculum, you can find her online — on Zappos.

Posted in Linger, Off My Noodle | Tagged mothers, shopping, teens | Leave a response