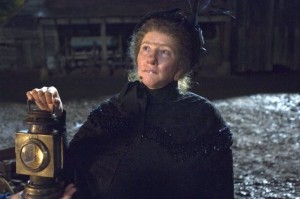 SYNOPSIS:A harried mom struggles to raise her kids and keep the family farm afloat while her husband is off fighting during World War II. Nanny McPhee arrives to help set things in order and teach the kids and their two ill-behaved cousins five valuable lessons.

Sex/Nudity: A married couple kiss; comic flirting between two hit-women and their target.

Violence/Gore: Mostly comic violence, including people who get swept into a wind; kids push and fight; a bird expands and appears ready to burst; a man is handcuffed to a pipe and told he’ll be “stuffed” for not repaying a loan. A few tense moments as a WWII bomb is defused (by kids!) and the fate of one character is iffy.

Profanity: Mild insults, including “weak-willed,” “wicked” and “rotten.” Kids are referred to as “savages.” A few uses of “hell” and “Oh my God.”

Drugs/Alcohol: Not an issue.

Which Kids Will Like It? Kids 7 and older who liked the first ‘Nanny McPhee’ movie or are familiar with the ‘Nurse Matilda’ books by Christianna Brand upon which the films are based.

Will Parents Like It?  It’s a sweet movie about never giving up, working together for the greater good, and realizing that beauty is more about character than looks.

REVIEW: ‘Nanny McPhee Returns’ is a great family film. It’s also an old-fashioned fairytale, complete with lots of magic and a happy ending. There are a few dramatic moments — yes, one that even brought tears to my eyes before I realized maybe they weren’t warranted (because, you know, I cry at every movie) – but overall, a sweet film. It also solves that age-old question of whether pigs can fly. I can now confirm that they do.

One of the reasons I love both ‘Nanny McPhee’ films is that Emma Thompson not only starred in them, but also wrote (both films) and/or produced (this film). I’m sure that gave her a lot more control over the final product, and you can see that attention to detail, from the World War II vintage clothing to the Ariel 350cc motorcycle with sidecar attached – used by the British Commonwealth forces during the war. She didn’t use just any old motorcycle; she used one that was actually used at that time. I love that.

The story revolves around a harried young mom named Isabel Green, played with hectic grace by Maggie Gyllenhaal (who gets the British accent just right). With her husband off fighting in the war, Isabel and her three kids (Asa Butterfield, Lil Woods and Oscar Steer) are trying to keep their English farm afloat, but things aren’t going well. Finances are tight, and Isabel’s greedy brother-in-law (Rhys Ifans) wants to sell the farm; he owns half, and needs it to pay off a gambling debt. Two unseemly women are after him to pay up that debt. But Isabel and the kids know nothing of this, and decide to sell their piglets in order to make a payment on their tractor, which is necessary to harvest their barley.

But when two young cousins, Cyril and Celia (Eros Vlahos, Rosie Taylor-Ritson) arrive from London to avoid all the bombing, things spiral quickly out of control. They’re spoiled city kids who don’t take much to all the “pooh” on the farm.

Cue Nanny McPhee (Emma Thompson), who arrives to help set things in order and teach the kids five valuable lessons. As with the first film, when each lesson is learned, Nanny McPhee gets prettier and prettier. At the beginning of the film, she’s a portly old woman with warts and a snaggle tooth. By the end, she’s downright stunning.

Nanny McPhee Returns’ is a charming film. The story, music and characters are all charming, including Maggie Smith as a batty old shopkeeper named Mrs. Docherty who seems to have a prior connection to Nanny McPhee.

The film is also a veritable bouquet for the senses, whether it’s the sticky syrup that Mrs. Docherty manages to get everywhere in her shop, the filth and “pooh” of the farm, the golden fields of barley ready for harvest, or the stately London war buildings where two of the kids travel to learn the status of Mr. Green.

The underlying message is that people behave the way they do for a reason, and sometimes it takes a little faith and magic to remember that and set things right. In this case, the magic includes flying piglets (who also swim in astonishing formation), statues that spring to life, motorcycles that fly, and a baby elephant with a mission.