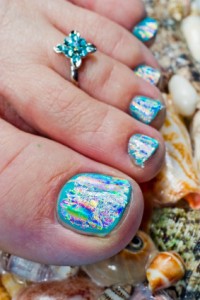 Lately, I’ve become increasingly aware that I am not young anymore. It’s not just the obvious, cliche stuff like the chronic back pain, the chronic need for reading glasses, the chronic need for the word chronic, and the conviction that plastic surgery isn’t all that crazy. It’s other, subtler things that catch me off guard and force me to acknowledge my advancing age.

I now shop at Lord & Taylor. For years, I’ve teased my mother, who has been loyal to L&T since the days of well-made pencil skirts and Kelly Girls. Now I happen to work a few blocks away from the grand old department store. After a frustrating experience on Zappos.com last week, I decided to take a twirl through L&T’s shoe department.

Well, no sooner did I enter the second floor “shoe salon” when a pleasant young woman asked me if she could help me. And then, by god, she helped me! She was totally there for me, graciously bringing every shoe I asked for in two sizes, just in case the shoe in question ran small or large. I just can’t get over it. I ended up buying a pair of flats and a pair of sparkly sandals. Soon I plan to return to the store for foundation garments.

Sometimes I stare at my cell phone in pure wonderment—at how tiny it is–so small and shiny and lozenge-like that I could swallow it without much effort. Why, when I was a child, you had to hold a clunky barbell of a receiver in order to chat on the phone. And it was attached by a curly cord to an even clunkier base unit (did that have a name?) You couldn’t even leave the room, let alone wander into a cafe and obliviously order a tall Sumatran blend while blabbing. In those days, too, the phones rang–with a real, mechanical ring, not one of 500 freaking ADD-inducing ringtones. In fact, there was no such thing as a ringtone. Don’t even get me started on my iPod Shuffle; When I was a girl, the Sony Walkman was beyond cool and sleek.

I’m attracted to men in their 50s. When R and I first separated, a friend of mine tried to sell me on her belief that 51-year-old men were the sexiest of all. I tried to be polite about it, but I was secretly thinking Ew. Gross. Can you say “grandpa?” But I have totally come around on that one.

Among the men who manage to emerge from their 40s without having gone to seed, there are quite a few who are–to use a juvenile term–hot. (George Clooney, anyone? Ed Harris? Liam Neeson?  Jeff Bridges, despite the beard?)  Men in their 20s, 30s and even early 40s look weird, babyish and unformed to me now. What’s with the unlined faces, the lack of gray hair and all that? I obviously have no future as a cougar. I like my men slightly craggy and weathered.

I’ve said the following to my kids: “Can you see in that light?” “You’re not leaving the house wearing that.” and “One day you’ll appreciate me.”

When the Land’s End swim suit catalogue arrives, I keep it, rather than chuck it immediately into recycling. What’s worse, I flip right to the bathing suits with skirts. This year, I’m hoping to find one with OLD LADY printed across the butt.

I’m inclined to brag about my cholesterol levels. I had to stop myself from sharing the blood-test results from my latest physical with everyone in my office. Part of this I chalk up to the fact that I write about chronic medical conditions for a living and have become acutely aware of how precarious it all is. I didn’t make a formal announcement, but I’m considering putting up a sign in my cubicle: HDL: 87  LDL: 82  Triglycerides: 53.

It’s time for trendiness and I to part ways. The first thing to go is the royal-blue toenail polish (with a daisy decal on the big toe) that I misguidedly chose for my last pedicure. Funky colors work on my teenage daughter, but do not flatter my ropey size 9 1/2,  46-year-old feet. Next time I’ll stick with a nice neutral tone and no designs.

I’m aghast at the sexualization of absolutely everything. My daughter came home with a shopping bag from Abercrombie & Fitch, which features a toned male torso. My first thought was: “I say, young man! Put on a shirt for goodness sake.”

Yesterday I was at Sephora (clearly a nickname for Sodom and Gomorrah). Among the store’s many demonic offerings is a line of makeup called The Orgasm Collection.I really thought I was hallucinating when I saw this. While the O word has been splashed across the cover of women’s magazines for years, I can’t believe it’s now an acceptable moniker for shades of lip gloss and nail polish. (What happened to “Revlon Red” and “Wine with Everything?” Weren’t those racy enough?). And to think that in my day, it was mortifying to bring a box of Stayfree mini-pads to the cashier!

I know I’m right and that the world IS going to hell in a hand basket.