RADICAL PARENTING: Classmates I'd Like to Make Babies with 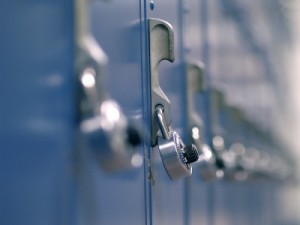 This was the title of a list taped to a locker door at a high school that I visited recently.  After I picked my jaw up off the floor and realized there were actually names on the list, I turned to my student guide.
“Is that for real?” I asked, stupefied.
She shrugged, “Yup. I didn’t make it yet.”
“Uh huh,” I looked at my adorable, but not yet developed 13 year-old volunteer guide. “Is that, like, a goal of yours?”
“Kinda, I would rather be on 186.”
“186?” I worried that it was some new kind of sexual position involving three teenagers and wondered if I would regret the clarification.
She pointed, “Like locker 186. That one is ‘Classmates I Would Like to Marry.’ I think I am more of a marry girl you know. No boobs yet.”

I was relieved to hear that she actually wanted to be on a more noble list, but was unsure of how to answer her statement about boobs. Do I try to make her feel better and convince her otherwise? Agree? Ignore? I chose to be fascinated by the list idea instead.

“Are there lists for everything?”

“Everything interesting,” she said.

I thought back to my high school lists.  I think there was Class Clowns and Most Likely to Succeed.  I do not remember trying to pick someone I wanted to make babies with.

She interrupted my thoughts, “It’s like the game F Marry Kill.”

I knew this game, “Ahh yes, who would you like to F, meaning make babies with, marry or kill from a group of three right?”

She giggled, “The hardest one I ever got was Cookie Monster, Big Bird or Elmo.”

Great, I thought, another stupendously awkward question.  The idea of marrying Elmo was almost more horrifying than F…making babies with Big Bird.

She gauged the level of inappropriateness in her head, “Probably not,” but then ran through her own answers, “I mean I guess I would want to kill Elmo, marry Big Bird and—“

“Okay, okay, great.  Glad to hear you’re thinking critically.” I waved my hands around to block out her attempt at answering.  “Back to the lists.  So there are a bunch? Who makes them?”

“Ya, there are always lists going on.  Anyone can put one up. Sometimes teachers pull them down and then we just start over.”

The whole idea of such a public (and unregulated) voting system on self-esteem, looks and sexuality made my skin crawl.

“Don’t you think it could hurt people’s feelings?”

“Well, that solves it then.  Now I know that it was on Glee, I definitely do not have to worry.”

She chuckled at my sarcasm and got my meaning, “Well they put up crush lists and I guess it even ends badly on the show.”

What most concerns me is a young person’s growing ability to compartmentalize people and themselves.  We try so hard not to put our kids in a box, and yet they do it to each other.  Somehow, putting something as serious as who you care for on a locker white board makes it less important, less special.

Tell us: Do your kids make lists? Did you make lists when you were in high school?

Vanessa Van Petten is the teen author of the parenting book “You’re Grounded!” She writes a parenting blog along with 12 other teen writers from the kid’s perspective to help parents understand what is actually going on in the mind of kid’s today. Her parenting tips have been featured in the Wall Street Journal, Los Angeles Daily News, Fox 5 New York, CBS 4 Miami and much more. Visit her web site at RadicalParenting.com

One response to “RADICAL PARENTING: Classmates I'd Like to Make Babies with”