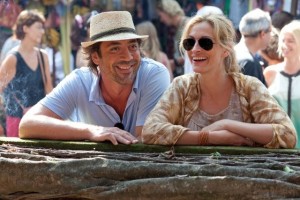 SYNOPSIS: Julia Roberts plays the real-life Elizabeth Gilbert, a bestselling author who realizes she doesn’t want to be married anymore and embarks on a one-year journey of self-discovery to Italy, India and Indonesia.

Sex/Nudity: Couples flirt and kiss; a few scenes show couples in bed together (mainly talking). A woman discusses her need to end her self-prescribed celibacy. At a party, a man takes a woman outside and strips down to go skinny-dipping, inviting her to do the same (his bare backside is shown). A couple goes behind closed doors, presumably to have sex.

Drugs/Alcohol:Social drinking at parties, restaurants, and dinners. A woman gets drunk at a party and has to deal with a major hangover the next day. A few references in casual conversation to Xanax and meth.

Which Kids Will Like It? Kids 14 and older who like Julia Roberts films and/or romantic dramas with lots of introspection.

Will Parents Like It?  Viewers familiar with the book might feel unfulfilled after watching the movie, but it does have some high points, including the gorgeous scenery and chemistry between Roberts and Bardem.

REVIEW: It took me a long while to get through Elizabeth Gilbert’s memoir, ‘Eat Pray Love,’ in which she decides to divorce her husband Stephen (played by Billy Crudup in the film) and embark on a one-year journey of self-discovery through Italy (eat), India (pray) and Indonesia (love). All of the introspection and navel-gazing sort of made me want to hurl, although I appreciate that she was able to lay it all out there for readers. It couldn’t have been easy for her. Here she is struggling through her own emotional turmoil, and then to let the whole world in to experience it with her is pretty remarkable.

It’s a journey that I’m sure many women would love to take, having the freedom to travel and explore their options, breaking free from any restraints that tied them to their former life. Then again, not many women are willing or able to do that. Most women have jobs, families, children and mortgages that need their attention, and to leave those behind would not only be unfeasible, it would also be extremely selfish.

So ‘Eat Pray Love’ allows us to live vicariously through one woman’s journey of self-discovery, and at the very least, prompts us to examine what we can change in our own lives to bring more fulfillment to both us and those around us. I just hope it doesn’t prompt women to up and leave their lives, children and families behind in search of fulfillment. I’m mainly thinking about the children involved in these scenarios.

It’s challenging to condense a 352-page memoir into a 133-minute movie. Some things are glossed over, some things aren’t covered at all, and you come out of the theater thinking maybe you should have just stuck with the book and not watched the movie. In spite of that, it’s a movie worth watching for several reasons.

First and foremost is the gorgeous scenery. It was filmed in Italy, India and Indonesia, and the locations are absolutely stunning, including those luscious plates of spaghetti and gourmet pizzas that Julia Roberts, as Elizabeth Gilbert, practically makes love to right in the restaurants. In Italy, she also meets some great friends, including Luca Spaghetti (Giuseppe Gandini), Giovanni (Luca Argentero), and Sophi from Sweden (Tuva Novotny).

In India, she meets perhaps the most interesting character in the film, Richard from Texas (Richard Jenkins), who affectionately calls her “Groceries” because of all the food she’s able to consume in one sitting. Richard, the iconic “gruff guy with a heart of gold,” is working through his own issues at the sacred ashram where Gilbert lands to meditate, let go of the past, and move on with the future.

In Bali, Indonesia, she re-connects with Ketut Liyer (Hadi Subiyanto), an aging medicine man with whom she studies (she’d met him previously while working on an article about the area), befriends single mom Wayan (Christine Hakim) and asks her friends to help fund a home for the woman, and finds love with the dashing and emotionally open Brazilian Felipe (Javier Bardem, with whom Roberts has good chemistry). By the way, the difference between Bardem’s sweet Felipe in this film and his cold-hearted killer Chigurh in ‘No Country for Old Men’ is just astounding. The guy’s a brilliant actor.

‘Eat Pray Love’ might not live up to everyone’s expectations, but I still think it’s worth checking out if you’re a fan of any of the actors, if you want to see how the film stacks up against the book, or if you simply love romantic dramas filmed in exotic locales.

My 13-year-old daughter saw it with me, and while most of it was okay for her in terms of adult content – although we really didn’t need to see one guy’s butt as he implores Gilbert to go skinny-dipping with him – she basically just got bored about half-way through and started playing Word Mole on my phone. I think it’s okay for kids aged 14 and older, especially if they like romantic dramas that examine love, spirituality and culture in other parts of the world.