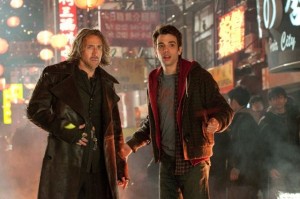 Violence/Gore: Fantasy violence includes fight scenes where characters are thrown against walls, energy blasts that electrocute characters, and one stabbing, though no blood or gore is shown.

Which Kids Will Like It? Kids aged 9 and older who like magical fantasy stories. This movie has a vibe similar to Nicolas Cage’s ‘National Treasure’ films.

Will Parents Like It?  It’s a good choice for a family movie, although you might forget about it the day after you see it.

REVIEW: No matter what character Nicolas Cage plays, the result is always the same: I look at the screen and see Nicolas Cage playing a character. He’s sort of like Tom Cruise in that respect. I don’t want to say they’re bad actors, because I really like these guys. But maybe their personalities are so strong that they always seem like the same guy in every movie. Something to ponder…

In this movie, Cage plays a master sorcerer named Balthazar, and I must admit, he does it really well. It’s not hard to think of him as an ancient sorcerer who’s curt with his new protégé, good with a plasma ball, and harboring a few secrets of his own.

The story actually begins a millennia or two ago, when Morgana le Fay (Alice Krige) tried to usurp the great wizard Merlin (James A. Stephens). Merlin managed to stop her efforts by imprisoning her inside a small capsule called a grimhold.

Also in the grimhold is the evil Maxim Horvath (Alfred Molina) and beautiful Veronica (Monica Bellucci). Back in the day, both Horvath and Balthazar loved Veronica, but she chose Balthazar, which ticked off Horvath to no end.

During the hundreds of years that everyone was trapped in the grimhold, Balthazar has been searching for Merlin’s descendant, a.k.a. the prime Merlinian– the only person who can vanquish Morgana forever. If she gets loose, the world will be in terrible peril.

Here’s where Dave (Jay Baruchel) enters the picture. He and Balthazar met briefly when Dave was a kid, but it’s not until Dave is studying physics in college that he learns his true calling. Balthazar takes him under his wing and teaches him the fine art of sorcery. Baruchel is refreshing as the geeky science nerd you’re pulling for – and whom you hope gets the girl, played by Teresa Palmer.

Let’s talk about the origins of ‘The Sorcerer’s Apprentice.’ It’s based on a poem by Goethe and was featured as one of the eight shorts in the 1940 animated film ‘Fantasia.’ Mickey Mouse plays the apprentice who enchants a broom to fetch water by the pail. But the floor is soon awash in water and the apprentice doesn’t know how to stop it.

I write all of this because the out-of-control cleaning utensils are featured in this film, as is the music from Paul Dukas’ ‘Scherzo,’ featured in the 1940 short. It’s kind of cool that Disney wove elements of the original short throughout this film, and you sort of don’t even realize it until part way through the movie.

Also cool are the special effects, which include a massive metal eagle and a bull sculpture that spring to life, walls that open up to reveal secret hiding places, tiny bug-like creatures that come together to form a villain, and an old car that’s magically transformed into a sleek sports car.

The movie includes a few fight scenes between good guys and bad guys, but nothing too disturbing for ages nine and older. This isn’t the best family movie ever made; you might forget about it the day after you see it. But if the kids are hankering for a summer movie, this one is good family fare.