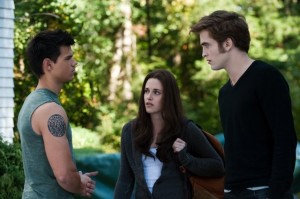 SYNOPSIS: The third film in the ‘Twilight’ series finds Bella Swan caught between werewolf Jacob Black and vampire Edward Cullen. Meanwhile, Victoria, still miffed over the loss of James, is on the move again and building an army of newborn vampires.

Sex/Nudity: Jacob spends most of the movie shirtless, as do the rest of the wolf pack. This film includes more kissing and sexuality than the first two ‘Twilight’ movies, because for one thing, Edward isn’t afraid to touch Bella anymore. Several passionate kisses, including two unwanted that result in a slap across the face. One scene of foreplay, although no sex takes place. Jacob warms Bella with his body during a snowy night.

Violence/Gore: Several violent scenes, including fighting between the newborn vampires and the Cullen/werewolf group. Fairly high body count and several scenes of dismemberment, although no blood is shown, partly because the vampires crack like ice when they’re cut or wounded. One flashback shows a woman about to be raped.

Which Kids Will Like It? Kids 11 and older who’ve read the ‘Twilight’ books, love movies about vampires and werewolves, or watched the first two ‘Twilight’ movies. Because of the violence and sexual content, however, I don’t recommend it for kids younger than 13.

Will Parents Like It?  It’s the best of the ‘Twilight’ movies to date, although there’s that nagging issue of whether Bella is conveyed as helpless and needing protection. On the other hand, she’s not afraid to confront danger to protect those she loves.

REVIEW: Since I haven’t read the ‘Twilight’ books, it’s a lot of fun seeing the natural progression of the story from a newbie’s point of view. I’ve heard little snippets about what’s coming up from my daughter and her friends who’ve read the books, but it hasn’t lessened my enjoyment of the movies.

And yeah, I really do enjoy the movies, especially ‘The Twilight Saga: Eclipse,’ which is the best of the three so far. I wouldn’t say they’re the best movies ever made or anything, but each new film is better than the last. Plus, I’m kind of a geek about vampires, werewolves and other supernatural creatures, so these movies fit right into my scene. I also love a good romance.

The story picks up with Bella Swan (Kristen Stewart) about to graduate from high school. Her vampire beau Edward Cullen (Robert Pattinson) keeps asking her to marry him, but she refuses until he agrees to “turn” her. There’s no doubt that Stewart and Pattinson have great chemistry.

But we can’t dis Team Jacob crowd – the fans who’d love nothing more than for Bella to end up with Jacob Black (Taylor Lautner), whom we now know is a werewolf. It’s clear that Bella has feelings for Jacob beyond friendship, but she’s firm in her love for Edward and feels she ultimately belongs with him.

This inter-species love triangle results in several dark and comic scenes of confrontation between Jacob and Edward, with Bella caught smack in the middle. They finally realize they’re going to have to work together to protect Bella, but it’s an uneasy alliance. As with the other films, Billy Burke as Bella’s dad Charlie provides lots of funny lines, too. He’s not keen on her spending so much time with Edward.

Meanwhile, we’ve got bad vamp Victoria (Bryce Dallas Howard) building an army of newborn vampires, who are at their most out-of-control during their first few months. She’s still ticked over the loss of James, and vows to seek revenge on the Cullens.

The Volturi make an appearance, although they’re not nearly as visible as in ‘New Moon.’ Still, Dakota Fanning as Jane is as cold and unfeeling as ever. New characters include the Clearwaters – Leah (Julia Jones), Sue (Alex Rice) and Seth (BooBoo Stewart), as well as other Quileutes. They help to give a little backstory to the rift between vampires and wolves, some of it told via flashbacks.

Sure, there are some scenes that border on hokey, like when the vampires are running through the forest and when the Cullens are training for battle against Victoria. But there are lots of good things, too. I really love the wolves — frightening and ferocious when heading into battle, but also cute and cuddly, like giant stuffed animals you want to hug to pieces.

As with ‘Twilight’ and ‘The Twilight Saga: New Moon,’ this movie will undoubtedly suffer through its share of parody videos, but I think they only help to cement the franchise in our psyches.

‘The Twilight Saga: Eclipse’ is a welcome addition to the series and sets things up nicely for ‘Breaking Dawn.’ At this writing, it’s scheduled to be told in two movies, released in 2011 and 2012.