OFF MY NOODLE: Flying the Crowded Skies 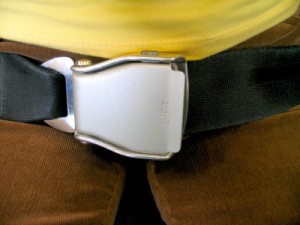 I do not envy frequent flyers one whit, unless they are among the rarefied few who get to cruise at 35,000 feet in business class or better. I’m just another plebeian, traveling the skies much in the same manner as my immigrant grandparents traveled the seas before me: in steerage class.

Airlines have many ways to rub salt in the wound to the hoi polloi. Upper crust fliers not only board first as the rest of us watch enviously, but they are already settled serenely in their ample leather-upholstered seats and sipping their first complimentary cocktails when the rest of us in the mule pack start tramping past them, dragging our carry-on bag and “personal item.” If we’re lucky, all the space in the overhead compartment will not have been taken up by the time we get to our seats.

On a recent business trip from Los Angeles to Boston, the woes of my journey in steerage would have made even my immigrant ancestors cluck with sympathy. I had just buckled myself in (without even consulting the instruction card) when I heard a flight attendant asking in a desperate tone for a volunteer to trade seats with another passenger, to allow a mother and child to sit together.

This plea pulled at my heart strings. We had once been in similar straits, the six of us arriving at the airport so late and bedraggled that no two adjacent seats remained, and our four children were scattered hither and yon in the cabin. When no one piped up, I waved my eager hand. “I’ll be happy to move!” I said, legging it up and over my fellow passengers.

I should have been suspicious when the flight attendant smothered me with oleaginous thanks as she pointed me in the direction of seat 23E. Just as I started to think how great I was for making this sacrifice, however, I sobered up at the sight of my new digs. Not only was 23E in the last row of the aircraft, it was also the middle of the three seats, next to what we would politely call a “person of size.”

No good deed goes unpunished, I thought as my new neighbor twisted out of her seat to let me in. I have always had a horror of people standing or sitting too close to me. I back away from shoppers in line who stand too close, and even once told a good friend, “I like you, but you’re too close to my face.” My religion teaches that I should do good deeds for their own sake, without any thought of personal reward, but I was more than willing to make an exception this time.

My super-sized seatmate was friendly, and we exchanged greetings. Then I turned to my neighbor to the right. “Hello,” I said.

“Me no English,” she said, smiling.

“Me no personal space,” I whispered back. The flight attendant bestowed her thanks by swiping a credit card in my four-inch personal video monitor so I could watch the in-flight entertainment for free. I would have waved my appreciation to her but my left arm – the very one that had raised itself so recklessly and was responsible for this mishap — was already impaled by my neighbor’s massive flapper. I wondered what the airline would give me if the circulation in my arm was cut off? A little tray with a minuscule fruit bowl, cheese and crackers?

Soon into the flight, the seat in front of me reclined, just missing my chin. I was defenseless, since seats in the hinterlands of aircraft cabins do not recline. Meanwhile, people were crowding the aisle next to our row for the facilities, forcing the fullback to my left to lean over me in a near tackle position. In row 23, it was going to be survival of the fattest, and I fought for airspace, despairing. We weren’t even over Tulsa yet.

I decided to practice gratitude for what I still had. First, I would change planes in Milwaukee, so that I could retrieve my left arm in only four and half hours, instead of nearly six. I also enjoyed the novel sensation of being thin, even though it had come at a terrible personal cost and was still temporary.

Finally, I could watch a movie on the airline. However, I couldn’t manage to land on the right channel. I called for the flight attendant, determined to claim my meager prize, but she explained that the airline’s largess for my heroic deed only extended to letting me watch reruns of The Office and other TV shows (a $6.00 value) but not a movie (an $8.00 value). Impaled arm or no impaled arm, she simply did not have authority to let me watch Invictus on a 4-inch screen. Talk about something costing an arm and a leg!

I then focused on physical and psychological survival, and practiced using my remaining free hand to turn the pages in my book. By the time I got to Milwaukee, I was nearly ambidextrous. I also vowed that on the next flight, even if an elderly, wheelchair-bound, wheezing, ventilator-dependent passenger was on board and begged me to relinquish my seat, I wasn’t budging.

To my great relief, on the next flight my seatmate was waif-like. I looked at her with tears of gratitude in my eyes. I was sure I had leftovers in the fridge bigger than she was. As we flew from Milwaukee to Boston, circulation returned to my left arm, and I relaxed, even falling asleep. When I woke, I remembered my dream: I was flying on another airline, serenely stirring my complimentary cocktail, in Business Elite, watching the unwashed masses trudge by.

Judy Gruen’s most recent book is The Women’s Daily Irony Supplement, which takes up very little space on an airplane. Read more of her work on www.judygruen.com.

Posted in Linger, Off My Noodle | Tagged planes, travel | Leave a response