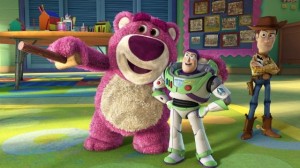 SYNOPSIS: Wacky antics ensue as Woody, Buzz and the rest of their toy box friends are dumped at a daycare center as their owner Andy gets ready to depart for college.

Sex/Nudity: Mild flirting between characters like Ken and Barbie, and Buzz Lightyear and Jessie.

Violence/Gore. Some bullying and rough talk, and a few perilous scenes, including one where Andy’s toys narrowly escape death from a fiery incinerator. Some of the daycare toys are frightening, including a large baby doll and a screeching monkey. Also, the daycare is set up like a prison where the toys are concerned. Toys are tied up or town into a sandbox as punishment, and the newer toys are sent to a room with the youngest, most rambunctious kids.

Profanity: “Shut up” is as bad as it gets.

Which Kids Will Like It? Kids 6 and older who liked the first two movies and/or action-animated movies.

Will Parents Like It?  Some scenes are a little too scary for very young kids, but those 6 and older should be ok with it.

REVIEW: It’s an action adventure! It’s a touching family story! It’s an edge-of-your-seat thriller! This third installment of the ‘Toy Story’ franchise has just about everything in terms of filmmaking, including an excellent story that’s not just tossed out there for the sake of finishing up a trilogy. As with ‘Toy Story’ and ‘Toy Story 2,’ ‘Toy Story 3’ will delight viewers from age six through 96.

Young Andy (John Morris) isn’t so young anymore. In fact, he’s all grown up and getting ready to head off to college. Toys aren’t exactly at the top of his priority list these days, but he finally agrees to bag up his old friends Woody (voiced by Tom Hanks), Buzz Lightyear (Tim Allen), Hamm (John Ratzenberger), and the rest of the gang, and stash them in the attic.

Except that’s not what happens. The toys accidentally end up in a daycare center, right in the thick of a situation not unlike a prison setting when it comes to the toy hierarchy. The newer toys (meaning, Andy’s) are sent to the roughest room at the center — the room where the younger kids run roughshod over the toys.

Not only that – and this is where it gets a little intense for younger viewers – toys who misbehave or don’t do what the head toy says are tied up or sent to a sandbox at night. Yeah, it’s sort of like solitary confinement. Even worse, the head toy is a loveable-looking stuffed bear named Lotso (as in, Lots-o’-Huggin’ Bear, voiced by Ned Beatty) who on the surface appears to be nice, but underneath is evil. We learn how he got that way, so kids at least get to understand where his personality comes from. Still, it’s a little too much for kids under the age of six, maybe seven.

There’s also a screeching monkey and a frightening baby doll who’s like a giant compared to the other toys. If any kids have these types of toys at home, they might go home and be afraid to look at them. The clincher is a scene where Andy’s toys narrowly escape death from a fiery incinerator – tense!

But we all know Andy’s toys are resourceful and will figure a way out of this mess. There’s a bit of separation and coming back together, but it’s Disney and it’s rated G (though probably should have been rated PG), so you know things will work out in the end.

There are lots of funny scenes and lines, proving that the filmmakers haven’t dumbed it down or taken the easy way out. For instance, Buzz Lightyear’s reset button gets pushed and he ends up speaking Spanish. Barbie discovers that there’s a Ken (who’s obsessed with clothes) living at the daycare center in his very own dream house. And the toys are their usual witty selves, including Mr. and Mrs. Potato Head (Don Rickles and Estelle Harris), Rex (Wallace Shawn), Slinky Dog (Blake Clark) and Jessie (Joan Cusack). Also, keep your eye out for Sid, the next-door neighbor from the first ‘Toy Story’ movie.

Usually by the time you get to the third movie in a sequel, the story starts to fade out, but that’s not the case here. The writing and production is just as good as the first movie, and better than the second. I recommend it for kids six and older, but be wary about the more intense parts for younger kids. It’s available in traditional and 3D formats. I saw the 3D version and think the film is better for it.

Oh, and yes, my ability to find something to cry about in every movie is working fine, thanks. Maybe it’s because I have kids who are headed towards those college years. Just prepare yourselves, parents. Don’t say I didn’t warn you.