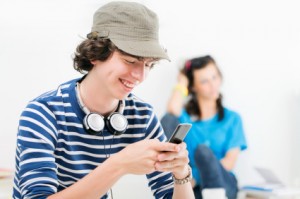 What’s the impact of parents who tune into technology? They tend to tune out of their kids’ lives. That doesn’t bode well for kids who need and deserve attention, and it certainly doesn’t help them put sexuality into perspective.

Recently, a study mea-sured verbal interaction between parents and children when tech toys were off and measured again when computers, phones and hand-held devices were in use. Predictably, the use of technology decreases the attention parents pay to their kids.  Read the story here.

Parents spoke significantly fewer words to children when their attention was divided. The author of the article noted the impact of electronic distraction on children’s verbal development and behavior, and I assume that it also impacts children’s basic understanding of their world.

As a sex educator, I see other ramifications too.  Let’s say a parent and child are in the grocery check-out lane, where tabloid headlines and graphic photos tout stars’ cellulite, cheating spouses, cosmetic surgery and drunken club hopping.  A preoccupied parent is likely to shush a child or offer a candy bar in exchange for a few more seconds on the phone.

An attentive parent can divert the child’s attention or comment on the unkind words and speculation. For example, if a child comments on a star’s weight, the parent can say, “Weight is a really personal issue, and it’s a shame magazines can’t respect that person’s privacy.”

It’s common to see parents pushing children in strollers while engrossed in a cellphone conversation. The child gets the message that the caller is more important or interesting than the child.  Self-esteem issues aside, the child is also missing out on learning about the world he or she is passing by.  A squirrel will race by unnamed.  A garden in flower will be chalked up as unworthy of attention.  A couple sexually grappling on the lawn?

Without an attentive parent to put the behavior into perspective, the child may be scared that someone is getting hurt. Or, the child may get the message that pubic sex is acceptable.  That may or may not reflect the parents’ view of public sexual displays, but the child won’t know unless a conversation takes place.  An attentive parent might point the stroller in another direction and comment on the difference between public and private behaviors.

Similar conversations can occur during TV shows when parents stop multi-tasking with their tech toys and put images and dialogue into the context of the family’s values.

One family in the New York Times article scheduled a nightly tech-free period during which the family members could reconnect, and the kids were really happy to have their parents undivided attention.  How much time are you using technology when your kids are present?  How might it be affecting interchanges between you and your child(ren)?  Maybe it’s time to put your own toys away.

Melanie J. Davis, EdD, CSE is the founder of Honest Exchange LLC, a sexuality education consulting firm in Somerville, NJ. She offers private consultations in person and by phone and is a popular speaker for professionals and for college and medical school students. She is an AASECT-Certified Sexuality Educator. Visit HonestExchange.com for free resources, book recommendations, and information about Dr. Davis’ services. Find her on Twitter: @DrMelanieDavis