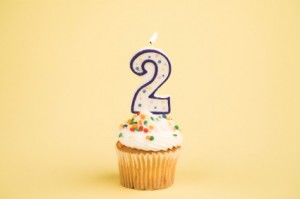 It’s been almost exactly two years since R moved out. I honestly can’t believe it has been that long–even though we middle-aged folks are constantly bemoaning the brisk passage of time. My goodness, wasn’t I just writing the post about surviving the first year? Where has the time gone?

Many of the (many) books I’ve turned to for guidance during this difficult period mention the two-year mark as a milestone. Apparently, if you’re the me in the scenario, by then you are officially back on your feet, successfully re-routed toward your glorious post-divorce future. I remember reading about it while still in my raw, skinless state and thinking I could not possibly survive two whole years. I hoped someone would hit the fast-forward button so I didn’t have to be awake for the duration.

And now suddenly I’m here, 24 months later. I am, in fact, re-routed and less raw, just like the books promised. Yet, oddly enough, I’m also feeling a little sentimental about that hellish phase, if only because it gave me an automatic excuse for being unable to cope with anything. Just like when you have a baby and chalk up the extra weight, the slovenly attire, the exhaustion, to the fact that, well, you just had a baby–until one day you wake up and notice that your kids are in elementary school and you can’t fall back on that anymore.

When I couldn’t handle certain household tasks (and I couldn’t), I forgave myself because, after all, I was a recently-separated, marginally-employed, suddenly-single mom. If my temper was too short with the girls (and it was) or I cried in the bathroom (and I did), well, wasn’t I off the hook, given that I was going through an awfully hard time? If I needed a reason to turn a man down for a second date (which I did), I played the confused-newbie: “I’m sorry. I’m so new at this. I’m not ready. I think I started dating too soon. Maybe we can reconnect in a few months…”

Abigail Trafford aptly describes those two years as Crazy Time in her book by the same name: “It starts when you separate and usually lasts about two years. It’s a time when your emotions take on a life of their own and you swing back and forth between wild euphoria and violent anger, ambivalence and deep depression, extreme timidity and rash actions. You can’t believe…how terrible you feel, how overwhelming daily tasks become, how frightened you are; about money, your health, your sanity.”

Now, at the two-year mark, I’m so jaded that when I read other women’s divorce sagas, I think, “Oh, boo hoo, honey. Pick yourself up off the floor and get on with it. Pump the gas, kill the mice, fix the toilet, change the occasional light bulb, join the dating site. Because–guess what–you have no choice.”

As crappy as I felt during that stage, it also came with the thrill of the new and unknown. I had my work cut out for me, a fierce sense of purpose. Every day felt like a challenge, an occasion that required rising to. It was often overwhelming, agonizing and exhausting, but there was so much intensity, so much drama, so much adrenalin. It was an adventure.

And now things have leveled off. I have a job; a guy. Much still remains unknown, unresolved, unclear–but Crazy Time has officially ended. It’s not exactly a let-down, it’s just so weirdly calm and still all of a sudden and I wonder what will be the source of my next adventure. Or maybe I should just embrace the stillness for a while.

(Note to the universe: I said adventure, not heartache. Please do not misinterpret this as a request for more heartache. Got that?)

One response to “LIVING IN SPLITSVILLE: Happy (Un)Anniversary to Me”