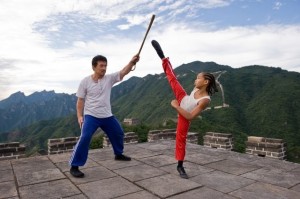 SYNOPSIS:When 12-year-old Dre Parker moves to China with his mom, he finds himself the target of school bullies. Until the maintenance man in his apartment building, Mr. Han, takes the boy under his wing and teaches him Kung Fu.

Violence/Gore. Lots of martial arts action and fighting, much of it between middle school-aged kids. Results include black eyes, cracked ribs and broken bones. Several scenes of bullying.

Which Kids Will Like It? Kids 9 and older who like martial arts, family dramas, or Jackie Chan movies.

Will Parents Like It?  There’s a lot of violence, considering that the kids are in middle school. But the overall theme is good.

REVIEW: It’s not often that a remake is actually better than the original movie, but that’s how I feel about ‘The Karate Kid.’ I realize the original film was released in 1984, and the filmmaking process has changed in the past 26 years. But the main reason I like this version better than the original is because of Jaden Smith and Jackie Chan (this is nothing against Ralph Macchio and Pat Morita, who are awesome in their own right).

You can tell that Jaden comes from good acting genes – parents Will Smith and Jada Pinkett Smith – not only because he shows a formidable range of emotions for an 11-year-old kid, but also because he has some of the same mannerisms as his dad. And that’s a good thing. I love Will Smith.

The story finds young Dre Parker (Jaden Smith) moving from Detroit to China, after his mom (Taraji P. Henson) is transferred there for her job (commentary on auto plant jobs moving out of the U.S.?). Dre is immediately befriended by a sweet classmate named Meiying (Wenwen Han), who’s also being pressured by her parents to become a concert violinist. That means lots of practicing and no cavorting with the new kid in school.

Dre also becomes the target of a group of bullies led by Cheng (Zhenwei Wang), who’s also a gifted Kung Fu practitioner. It gets to the point where Dre is hiding every time he sees these thugs, which doesn’t make for a good school experience, especially for the new kid.

Surprisingly, Dre learns that the maintenance man in his apartment building, Mr. Han (Jackie Chan) is secretly a Kung Fu master. Dre convinces him to teach him the art of Kung Fu, which Mr. Han does reluctantly, showing him that it’s not just about punches and kicks, but also about calmness and maturity. And he’s harboring a few secrets of his own.

As with most movies involving any kind of sport, it all comes down to “the big match,” and the ending is somewhat predictable. That said, I sort of like that these movies always come down to “the big match,” because you expect it and what sort of ending would it be without it? Lessons learned, mountains scaled, the impossible achieved, and so on and so forth. We also get to see some gorgeous views of China, as Mr. Han takes Dre to some sacred places.

Jaden Smith already has an impressive list of films to his credit, including ‘The Pursuit of Happyness,’ ‘The Day the Earth Stood Still,’ and now ‘The Karate Kid.’ Next up, he’s set to star in Amulet, a sci-fi family film based on the novels by Kazu Kibuishi and produced by Will Smith and James Lassiter. I’ll look forward to following Jaden’s career.

JANE’S REEL RATING SYSTEM:
One Reel – Even the Force can’t save it.
Two Reels – Coulda been a contender
Three Reels – Something to talk about.
Four Reels – You want the truth? Great flick!Five Reels – Wow! The stuff dreams are made of.