LIVING IN SPLITSVILLE: Good-bye Boycott on Jewelry from My Ex 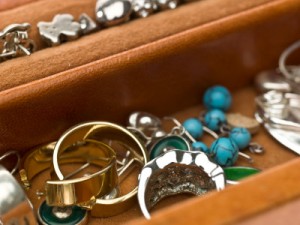 This past weekend I decided to wear a bracelet that I haven’t worn in years. No big deal, really, except that the bracelet was from R, and for a long time I boycotted most of the jewelry he gave me in a misplaced, don’t-mention-the-war type attempt to protect myself from sentiment. (Plus, the books say that removing physical reminders of the spouse is necessary to heal and rebuild.)

The downside of my jewelry boycott (mancott?), though, is that I have been wearing the same wimpy handful of non-R-associated necklaces and earrings for two years now and I’m getting bored.  About 80 percent of my jewelry collection was given to me by R, and,whatever one may or may not think about the man’s other facets (tee hee—get it, facets?), one can’t deny that he had excellent taste in baubles. In fact, it instilled in other females the kind of awe and envy that is usually reserved for that lone remarkable dad pushing his kid on a swing at the playground on a weekday morning.

My friends routinely expressed amazement. “R got you that? He picked it out himself? All by himself?” Then would come the sad stories of having to return–or, worse, keep–ill-chosen husbandly gifts of jewelry, or of having to actually accompany one’s husband to the store so as to avoid faking an “Oh, honey, I love it!” moment.

I never understood this stereotypical cluelessness among men, because it seems that if someone truly knows you, he also gets your style and sensibility. Right? It’s so simple. (The truth is that toward the end of our marriage, R’s jewelry prowess began to falter, and I ended up returning a pair of whimsical, but not wearable, antler-shaped earrings. Something was clearly amiss.)

At one point during those stormy pre-separation months, I weepily gathered every last bit of jewelry that R had ever given me into a tangly mass and chucked it into the wastepaper basket next to his dresser. Fortunately, a sliver of my rational brain was still functioning and knew I would regret that move. I dug it out and tossed it into a drawer instead.

And now that I’ve lifted the ban, it’s like I have all this new jewelry! There are a few key pieces that give me a pang, but it’s amazing how time has diluted most of the voodoo.

Once I found the bracelet, I started sifting through the other stuff. I even reluctantly opened the gray suede box that now serves as a tiny coffin for my wedding and engagement rings. I put the engagement ring—one of my favorite pieces of jewelry (and yes, R chose it all by himself)—on the ring finger of my right hand. Then I put it back in the box because that one’s still a little fraught, plus it seems wrong to wear a symbol of a marriage-to-be when the marriage is now a has-been.

But IS there any real reason not to wear it, now that it’s not so much my engagement ring as just a pretty ring that happens to have been given to me during a prior engagement?

Tell us: What do you think? Can you wear jewelry your ex gave you?

Posted in Linger, Living in Splitsville | Leave a response