OFF MY NOODLE: When the Kids Man the Grill 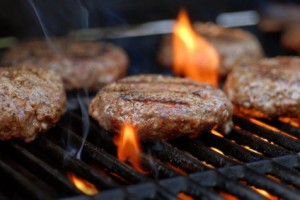 My kids have this bizarre notion that barbecues are the easiest way to fix dinner this side of a take-out menu. This is because their main contributions to barbecues have been eating twice as much meat as normal, urgently spraying ketchup as if they’re putting out a fire, and chugging sodas.

My husband usually mans the grill (“persons the grill” just doesn’t sound right, does it?), but apparently is only capable of this feat while wearing his Official Barbecue Shirt, festooned with a blinding pattern of beers and burgers. This forces us to look at the shirt for at least three hours or until the last beer is finished, whichever comes first.

So when one of my teenaged sons asked me, “Can we barbecue?” I decided it was time to teach him about the unsung, behind-the-scenes work involved in transforming raw hunks of steer into tender and juicy burgers, medium rare. “We cannot barbecue, but you can barbecue,” I said. “Go to the store, buy the meat, clean the grill, baste the meat, watch it carefully so it doesn’t burn, wipe down the backyard table, and clean up afterwards. You need to be responsible for everything.” This was sure to squelch the idea and I would be safe. “Sure, no problem,” he said. Now I was in for it.

I gave him lots of cash for the store, since in addition to our own six hungry family members several of his large teenage friends were at the house. They had appetites the size of a Congressional appropriations bill.

“Better make a salad and some mashed potatoes also,” I said when they returned.

“But remember, it’s your barbecue.”

“Relax, Mom!” he said. I went to my room to take a nap. (After all, my son had told me to relax.) I’d been asleep for nearly two entire minutes when a baseball began thwacking against the house, right outside my room. I had forgotten that baseball practice was an essential step in preparing for successful barbecues. I’m sure I’ve seen Emeril Lagasse do it many times.

“Don’t you know you have to peel and cut the potatoes before you boil them? And put a lid over the pot? It’ll take a month for them to boil like this. And this meat is still half frozen. I told you to let it sit in room temperature water, not to let it sit on the counter.”

I fished the Russets out of the pot, peeled and cut them, then returned them to the pot. Then I put the half-frozen meat in a bowl of water. ”

Remember to marinate the meat,” I reminded them. “After all, this is your barbecue!”

I left the kitchen to attend to other matters, but my unerring motherly intuition sent me Code Red emergency warnings. I returned to the scene of the culinary crimes.

“You said you’d clean the grill!” I shouted. I lifted the lid only to discover a hot dogicide: A dozen dogs were so charred that DNA tests would never determine their origin. Coughing and blinded by smoke, I turned off the gas. After the grill had cooled and I could see again, I took the wire brush and scraped off vestiges of barbecues past.

“You should have done it yourself. This was supposed to be YOUR BARBECUE!” “We had everything under control,” my son said. “We like our hot dogs well done.” “I still need to make sure you don’t accidentally cook Salmonella Surprise on a dirty grill and serve it with a side of raw, dirty spuds. I didn’t want all the hassle of a barbecue in the first place.

“He went to buy beer,” reported Sam, one of my son’s friends. Sam always miraculously shows up whenever we have meat on the grill. It’s uncanny, really.

“You can’t have a barbecue without beer.” They refused to make a salad, but to humor me, they set out a jar of pickles and a bowl of chips on the table, claiming they were “vegetables.” I steamed some broccoli, in the case any of the other kids had parents who would ask them what the Gruens had served at dinner.

“Nobody eats any burgers till the potatoes are done!” I ordered. “I took the time to make them, even though this was supposedly your barbecue.” The boys hustled back to play more basketball while I stood sentry over the spuds. When they were done, I decided to grill the remaining burgers. “How’s everything?” I asked, resorting to my default waitress mode.

“Especially the beer,” my husband said, nursing a foreign import while slathering mustard on a burger. He was attired in his Official Barbecue Shirt, which required me to run and put on my strongest sunglasses. The boys tried to sneak a few extra beers, which we intercepted and which is why college is such a terrifying idea.

As soon as the last burger was gone, so were the boys. The table was a mess, and it took all my self-control not to clean it up. But I didn’t. After all, it was their barbecue.

Judy Gruen is preparing for another long, hot summer trying not to get overly involved in the family barbecues. She urges other mothers in the same predicament to relax afterward with her book, The Women's Daily Irony Supplement

" target="_blank">The Women’s Daily Irony Supplement, because no clean-up is required.

Posted in Linger, Off My Noodle | Tagged cooking, teens | Leave a response