[Editor’s note: MommaSaid’s Melanie Davis, of the Buzz on the Birds and the Bees, and Kathy Sena, of Boo-Boos, Germs & Pap Smears, are teaming up to tackle the news about this study on how earlier or later puberty can trigger aggression in boys.] 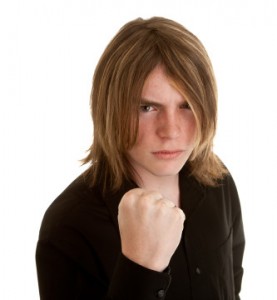 The arrival of body hair, voice changes, acne, and sudden erections can cause adolescent boys embarrassment and concern, but these changes may be easier to manage than those that come with early or late puberty.

Penn State researchers have learned that when puberty arrives earlier or later than usual, boys experience emotional and behavioral issues that can cause problems for them and for others. This news provides even more incentive for parents to be aware of their sons’ sexual development.In an article inScienceDaily, Penn State researcher Elizabeth J. Susman was quoted as saying, “This is the first study to show that the timing of puberty moderates biological risks of antisocial behavior. The implication is that parents should be especially sensitive to picking up signs of earlier or later puberty in their children…Parents and healthcare providers should be aware of how puberty can be stressful — behaviorally and biologically — on kids.”

Puberty is a life stage when the body changes physically from childhood to early adulthood, i.e., when it is capable of sexual reproduction. Boys typically begin puberty at age 12, while girls begin the process at age 10.  In males, the brain releases hormones that trigger the hormone production in the testes, stimulating the maturation of muscles, bones, skin, the brain, and the sexual and reproductive organs. As puberty progresses, secondary sex characteristics become apparent, including body and facial hair, a triangular torso shape as shoulders broaden, and the deepening of the voice.

As reported in the May 2010 issue of Psychoneuroendocrinology, both early- and late-onset male puberty can cause the brain to release extra cortisol, which is a stress hormone. The researchers speculate that when higher levels of cortisol combine with testosterone (the primary male sex hormone) the result can be undesirable behavior. This was not found to be an issue in girls.

Parents often wait to discuss sexual development and behavior until their sons reach age 12, on the assumption that children are better off not thinking about sexuality until it’s absolutely necessary.  The study findings, however, indicate that parents need to time conversations by a son’s development rather than his calendar age.

While adolescents may look forward to being teens, they do no intuitively understand the physical and emotional changes they’ll have to go through first. And, while they may learn about puberty in school, adolescents often lack the emotional maturity to apply the information to themselves.  You can help your son adjust by talking about puberty long before you expect it to begin. Saying, “Soon, you’ll be a young man” won’t cut it. He needs to know about what kinds of changes he will experience and what the affects may be.

Some boys sail through the changes with relative ease, while others struggle to adjust. Typically, when puberty begins, your son’s hair or skin may be oilier than usual. He may quickly outgrow his clothing, or his features may be changing slightly as he puts on weight. He may seek more awkward than usual as he adapts to his changing body.

If this begins earlier than expected he may also struggle with the hormonal wash mentioned earlier, i.e., cortisol (stress) and testosterone (growth and aggression). If he begins puberty later than expected, the most obvious sign may be that his peers appear to be maturing at a much faster rate. He may look like a boy compared to a growing number of friends who appear more like young men. That may be a factor leading to the antisocial behavior reported in the study.

As the Penn State study found, early or late puberty adds a level of stress to the mix of these already tremendous developmental changes.  There is no guarantee that explaining puberty to your son will change his behavior, but it makes sense that knowing what’s going on will ease some of his the stress and worry. In turn, you may get to see once again your son’s kinder side.

Melanie J. Davis, EdD, CSE is the founder of Honest Exchange LLC, a sexuality education consulting firm in Somerville, NJ. She offers private consultations in person and by phone and is a popular speaker for professionals and for college and medical school students. Visit HonestExchange.com for free resources, book recommendations, and information about Dr. Davis’ services. Find her on Twitter: @DrMelanieDavis

One response to “BUZZ ON THE BIRDS AND BEES: Is Puberty Making Your Son More Aggressive?”