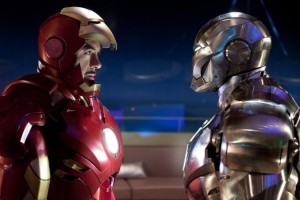 SYNOPSIS: Billionaire Tony Stark must deal with deadly issues involving the government and his own friends, as well as new enemies due to his superhero alter ego Iron Man.

Sex/Nudity: Several scenes feature women in skimpy outfits, including the dancers at the Stark Expo. Natalie / Black Widow is seen in a bra during a few scenes, as well as skin-tight outfits in other scenes. Lots of sexual innuendos in Tony Stark’s dialogue, and one kiss between two main characters.

Violence/Gore: Plenty of explosions and dead bodies, although not much blood is shown. One scene indicates that people have been hanged, although you don’t see any close-ups. Two characters have a major fight that smashes up Tony Stark’s house. Ivan causes chaos on a race track with his lightning-like whips. Hammer Industries makes weapons.

Profanity:Language includes “stupid,” “damn,” “ass,” and “b—-es.” Tony’s dialogue includes plenty of sexual innuendos, such as “I serve this great country at the pleasure of myself, and if there’s one thing you can count on, it’s me pleasuring myself.”

Which Kids Will Like It? Kids 13 and older who liked the first ‘Iron Man’ movie and/or comic book movies.

Will Parents Like It? Yeah, it’s a pretty fun movie. Not as good as the first one, but a great escape for a couple of hours.

REVIEW:I loved the first ‘Iron Man’ movie, so was really looking forward to seeing what they did with ‘Iron Man 2.’ I wouldn’t say it’s as good as the first one, but it’s still a really fun ride, and it’s great to see Robert Downey, Jr. as Tony Stark again.

This time around, the world knows that Stark is Iron Man, and he’s also helped the United States broker a peace deal with other countries. The downside is that the government, led by Senator Stern (Garry Shandling), is trying to force Tony to turn over the Iron Man suit to outfit the Armed Forces.

Meanwhile, a dying Russian physicist is holding a serious grudge against Tony and his visionary father Howard for all of his family’s misfortune. In his last breath, he tells his son, Ivan Vanko (Mickey Rourke) – a.k.a. Whiplash — to seek vengeance on the Starks. Ivan, also a brilliant physicist, ends up creating his own special suit to destroy Iron Man, and ends up working with weapons entrepreneur Justin Hammer (Sam Rockwell) in the process.

On top of all that, Tony is dealing with the fact that Palladium, the element that’s keeping him alive, is slowly poisoning his blood, and so far, he’s failed to find a less toxic alternative. Thinking his days are numbered, he appoints Pepper Potts (Gwyneth Paltrow) as CEO of Stark Industries and alienates his friend Lt. Col. ‘Rhodey’ Rhodes (Don Cheadle).

Much of this movie revolves around Downey Jr.’s irresistible charm, and rightly so. He inhabits the role of playboy billionaire Tony Stark with uninhibited gusto. Still, the plot seems less intense than the first movie. In one scene Stark and Rhodey, dismayed that Stark is throwing his life out the window, have a knock-down drag-out fight that destroys Starks’ posh pad. Even for a comic book movie, the scene seems to be thrown in there to add another fight sequence to the movie.

Scarlett Johansson plays SHIELD double agent Natalie Romanoff – a.k.a. Black Widow – and Paltrow returns as Stark’s long-suffering enabler and (at long last) love interest. The best part about ‘Iron Man 2’ are the villains played by Rourke and Rockwell. They’re all-out campy, and I would expect nothing less from both actors in a movie based on comic book characters. Rourke is covered in tattoos and has a great Russian accent.

While not as good as ‘Iron Man’ or other comic book movies like ‘The Dark Knight,’ ‘Iron Man 2’ is still a fun action flick and a great way to kick off the summer movie season.

Jane Louise Boursaw is a freelance journalist specializing in the movie and television industries. Visit her online at filmgecko.net, ReelLifeWithJane.com or email jboursaw@charter.net.