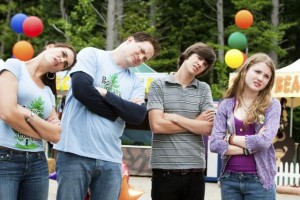 SYNOPSIS: When Dan Sanders gets a job heading up a housing development, he moves his wife and son to the Oregon wilderness to do just that. He doesn’t count on the local woodland creatures rising up and staging a major protest.

Sex/Nudity: A married couple hug and kiss, some hand-holding and mild flirting between teenagers.

Violence/Gore: Lots of pratfalls played for laughs. Dan is terrorized by woodland animals; he gets sprayed by skunks, falls from a second story and lands on his groin, gets urinated on by a raccoon, has an allergic reaction to bee stings, and is stalked by a bear. Animals are shot with tranquilizers and caged.

Profanity: Mild insults, including “shut up” and “stupid.”

Will Parents Like It? It’s just not a great movie.

REVIEW:Sometimes the use of goofy and/or computer-generated animals can be pretty funny. It worked when that dancing gopher terrorized Bill Murray’s character in ‘Caddyshack.’ But that movie had a lot of other things going for it, including a funny story and Harold Ramis as director and writer. ‘Furry Vengeance’? Not so much.

The story follows Dan Sanders (Brendan Fraser), who has relocated with his wife Tammy (Brooke Shields) and son Tyler (Matt Prokop) from Chicago to the Pacific Northwest to oversee the construction of a new housing development for his ambitious boss, real estate tycoon Neal Lyman (Ken Jeong).

Lyman professes to be “green,” but he’s anything but and plans to annihilate a local forest to build houses and a forest-themed mall. But the woodland creatures are onto him. Led by a resourceful raccoon, they terrorize project manager Dan in various ways. Dan gets sprayed by skunks (three times at close range), urinated on by a raccoon, and stalked by a bear.

Meanwhile, Tammy and Tyler are against the destruction of the forest, and Tyler even joins forces with new love interest Amber (Skyler Samuels) to halt the project.

It’s a family movie, so you can see where things are headed; rest assured that all ends well. And, of course, the message is good. Saving the animals’ woodland habitat instead of mowing down all the trees is good. But the dialogue and action is really predictable and cliché, including the many pratfalls and gross-out humor jokes along the way.

The cast is funny – in their other projects. Angela Kinsey (Angela on ‘The Office’) and Ken Jeong (Senor Chang on ‘Community’) are both darn funny in their TV roles, but here, they’re just used as ridiculous props for the other characters, mainly Brendan Fraser. And he just looks awkward and uncomfortable from start to finish.

I recommend skipping this movie in favor of better eco-friendly family films, like ‘Hoot,’ ‘Happy Feet,’ and ‘Evan Almighty.’

Jane Louise Boursaw is a freelance journalist specializing in the movie and television industries. Visit her online at FilmGecko.net, ReelLifeWithJane.comor email jboursaw@charter.net.”