OFF MY NOODLE: They Don't Call it 'Tax Bite' for Nothing 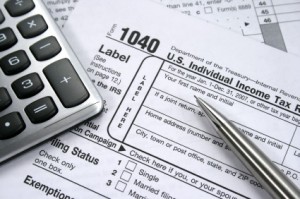 Like a lunatic, I’ve frizzled away two days in fruitless search of a two-inch square blue receipt that proves that I paid ten bucks to park downtown for a business meeting seven months ago. Without this blasted tiny scrap of paper, I could still honestly claim the expense on my income tax statement, but I would live in fear that an IRS agent might knock on my door (probably when I have ugly green exfoliating sea kelp mask on my face) and challenge me to produce the receipt, or else find myself wearing a new pair of matching silver bracelets. Or worse, the discovery of my tax “discrepancy” might make someone decide to invite me to join the Obama administration, and during Congressional confirmation hearings, a pesky senator would unearth my secret and make me the new Treasury Secretary. Sorry, but I’m not taking any chances.

You might say that this is a conundrum of my own making. A more organized person wouldn’t have tossed business receipts helter-skelter in file folders, the kitchen junk drawer, or in one of my car’s 18 cup holders. But who among us is without filing sins, let her cast the first 1040 form! I am careful about filing important papers. Usually. But darned if many of these same documents fancy themselves as European workers: after only a few hours on the job, they saunter off for six weeks of paid leave in the Bahamas.

Tax preparation has become more painful than hemorrhoids. But what else can you expect? Even if you took every copy of the Gideon Bible ever printed in the known universe and laid them end to end, they would only cover Title 26, Subtitle E, Chapter 51, Subchapter H, Part 1, Section 5502 of the absurd, preposterously massive tax code. For the curious among you, this section deals with necessary applications to the government before commencing the business of manufacturing vinegar by the vaporizing process. I kid you not.

Once, a maverick senator floated the outlandish idea to “simplify” the tax code. He thought there was no earthly reason why the entire tax code couldn’t be a document that a normal human being might be able to read in only 15 years (with occasional bathroom breaks), instead of 30. This senator’s district was instantly gerrymandered, and he was never heard from again.

To understand our income tax system, we need to understand certain sophisticated terms including “gross income,” “alcohol fuel credit,” “depreciation,” and “American Samoa.” Well meaning people have tried to explain these terms to me numerous times but I still ended up befuddled and with a twitch in my left eyelid.

I once tried to calculate my own taxes following the instructions on the 1040-Not-So-E-Z Form, which went something like this:
“Enter taxable income from line 39.
Enter the smaller of line 16 or 17 of Schedule D.
Subtract line 21 from line 20 on your cousin’s Schedule R.
Enter the smaller of line 15 or line 23 if it is a full moon (but not less then zero).
Subtract line 28 from line 86 from your neighbor’s Schedule B.
Enter the larger amount from line 23 or line 45 if married and filing jointly, or married and filing a joint instead of a tax return because you figure the government had already messed with your head quite enough.”

Even if you are bold or crazy enough to try this at home, none of your arduous calculations will matter anyway. No matter how many brain cells you explode trying to figure it out, the fix is in, and the government will conclude that you owe them at least $10,000. They have no choice, since they are sending out checks to millions of Americans who pay no taxes, and heck, somebody has to cover that nut.

I’m giving my scavenger hunt for the blue receipt another two hours, and then I’ll turn it all over to the Lord and my accountant, who doubles as the Lord at this time of year. And then I’m going to pop a couple of migraine pills and lay down, relieved that it’s only another 11 months till I have to reenact this tragic-comedy all over again.

Judy Gruen’s latest book, The Women’s Daily Irony Supplement, is not a tax-deductible expense for most people, but don’t let that stop you from getting it! Read more of Judy’s work on JudyGruen.com.

Posted in Linger, Off My Noodle | Tagged taxes | Leave a response